In Photos: Tharakans map their past, present and future

This photo story explores how indigenous Tharakan People from central Kenya are reviving their Earth-centred customary laws, sacred natural sites, indigenous seeds and the life of their territory in climate-changed times. 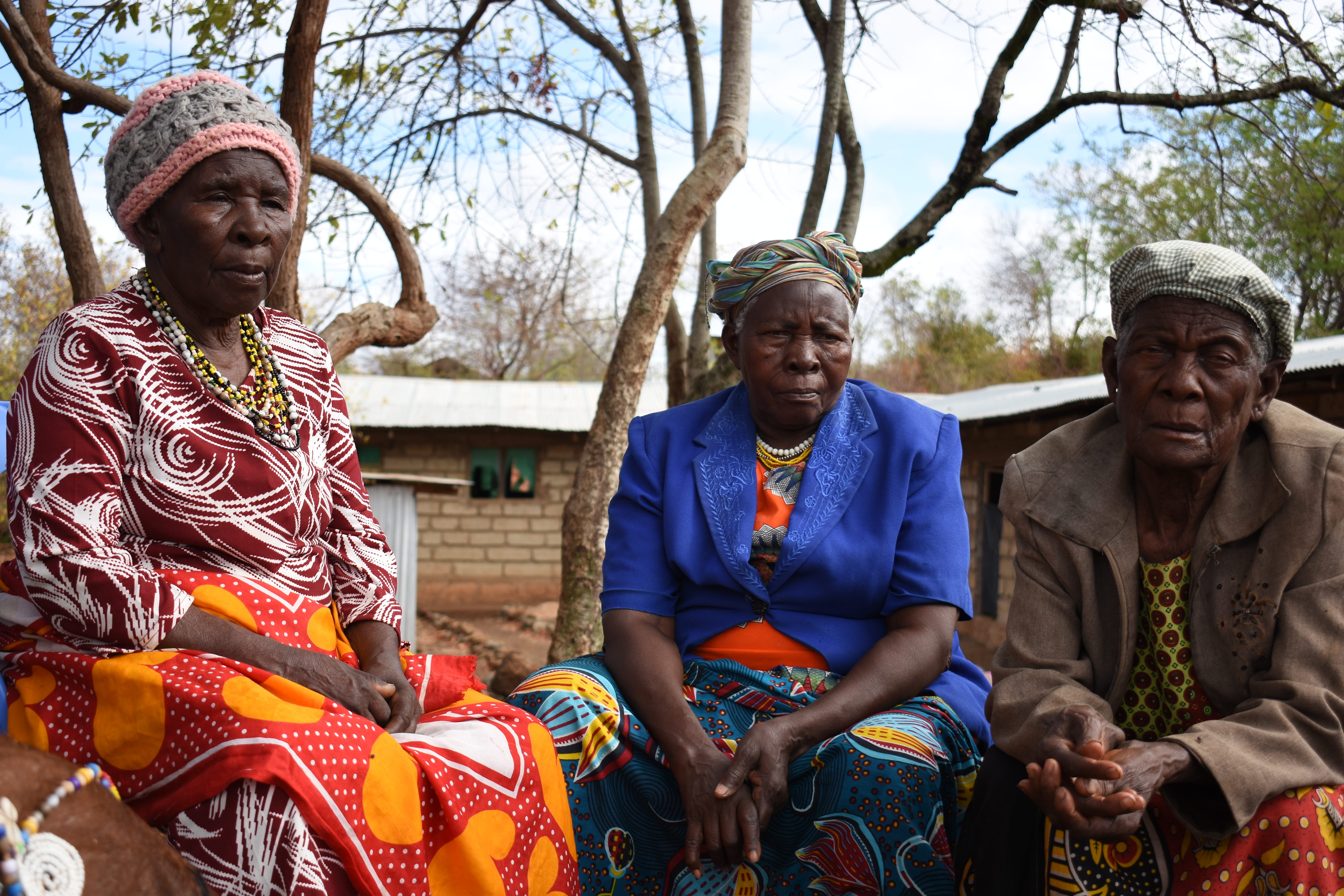 Brought together by SALT, (Society for Alternative Learning and Transformation), a community-based organisation founded  by Tharakans, a group of elders, sacred site custodians, seed savers, herbalists, hunters, bee keepers and youth have been meeting monthly for the past five years.

Through community dialogues they have been working to bring back their knowledge and practices. Elders and knowledge holders have begun to pass on the memory of how their territory was before the disruptions of colonialism, globalisation and climate change, and how they governed themselves in harmony with Nature, to the youth.

From 30th September to 5th October 2019, this group with ancestral roots in Tharaka territory came together to document their returning memory and knowledge using eco-cultural maps and calendars

First developed by Indigenous Peoples in the Colombian Amazon over thirty years ago, these maps and calendars are ‘talking tools’. Making them through a collective process supports communities to discuss, debate and develop shared understandings of how their territories and governance systems functioned in the past, the cultural and ecological losses and challenges of the present, and a shared vision of the future.

Remembering the Past Order 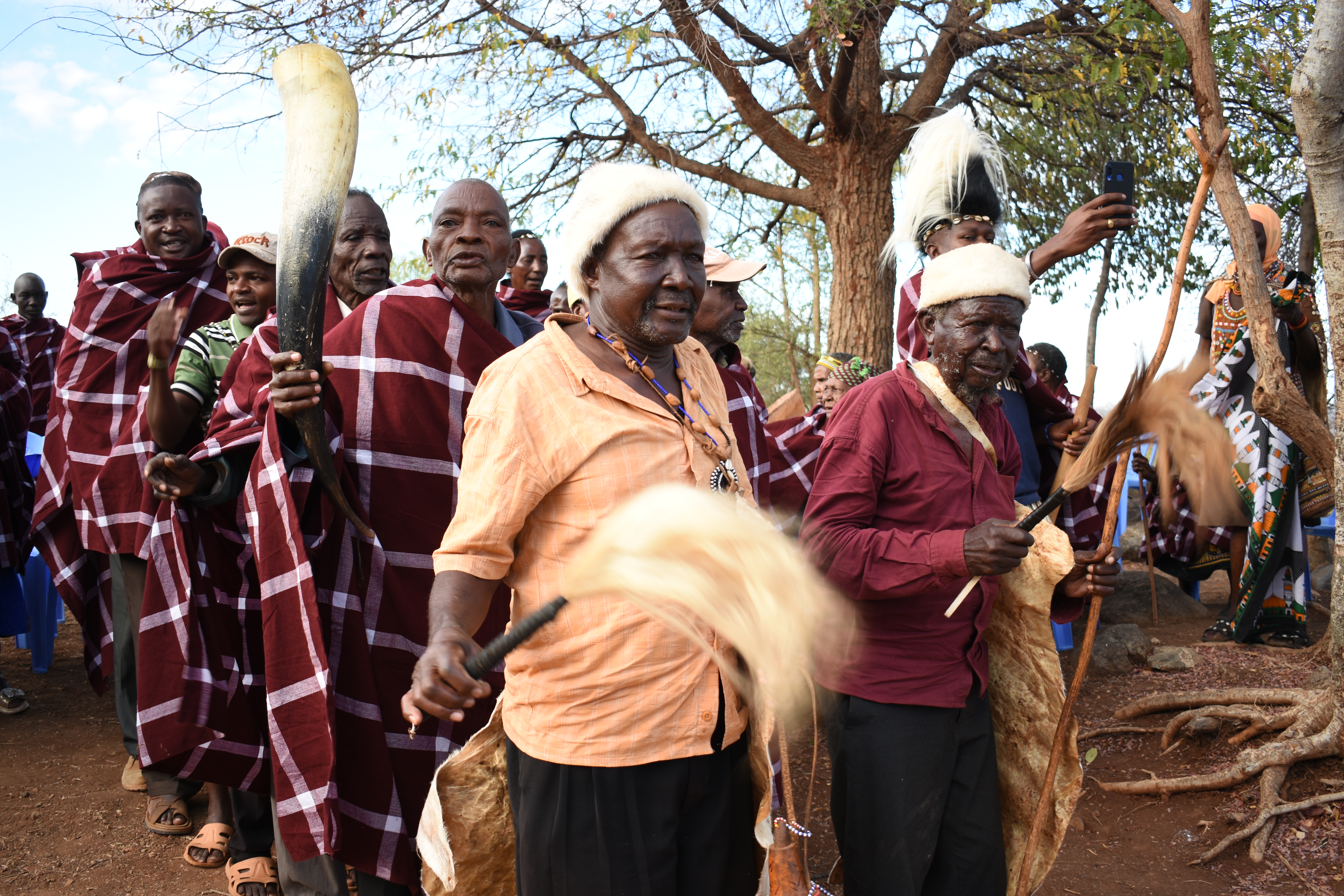 At the end of a long dry season, a group of 55 Tharakans and guests from Uganda, Zimbabwe, South Africa and the UK gathered in Tharaka Nithi County for the mapping. Prayers led by spiritual leader, Mugwe (right), the sounding of warrior horns, traditional dances and songs, opened the mapping process. 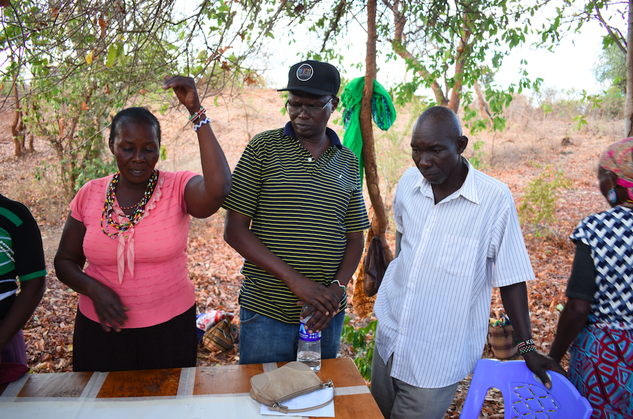 The first day of the process was spent in cross-cultural discussion. Gaia’s Liz Hosken shared the story of ecological and cultural revival in the Colombian Amazon, where the community dialogues and this form of mapping first originated. 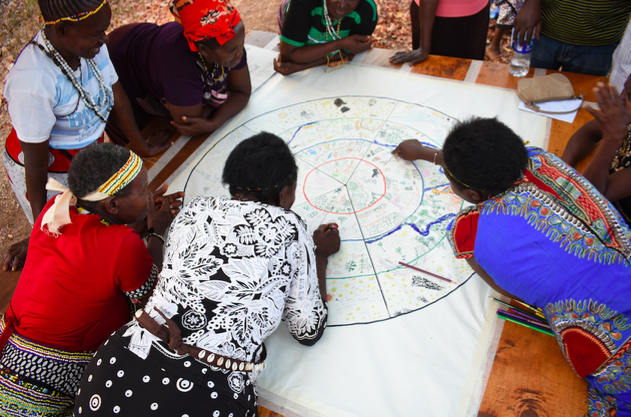 Inspired by these stories, Tharakan sacred site custodians, seed savers and cultural knowledge holders began the process of drawing maps and calendars of the past. They added detail and depth to ‘sketch’ maps and calendars completed in 2018, having engaged in intense dialogues and further community research to fill the gaps which emerged in their first draft. 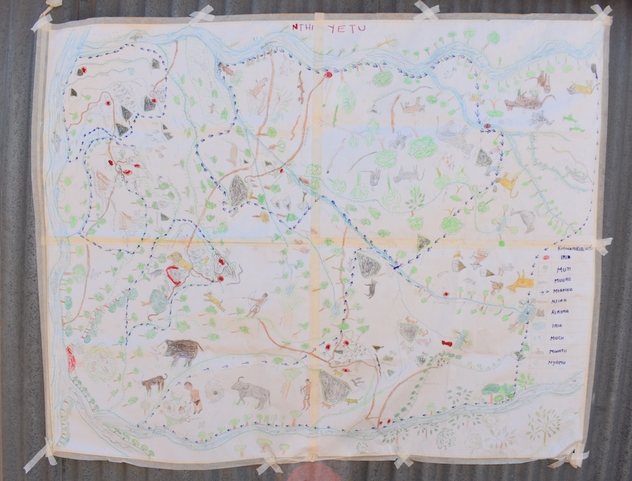 The ancestral map drawn by the custodians reveals a forested territory, with many clean, free flowing rivers. Tharaka was rich in wildlife, including elephants, antelope, leopards and lions. Elders shared that these animals were once common, year-round residents in the area. A network of sacred natural sites spread across the land, protecting water sources and critical ecosystems. Clans lived in extended territories, governing themselves according to customary laws that upheld the health of territory and the inhabitants of all species. These laws were derived from the community’s deep understanding of the laws of Nature in Tharaka. 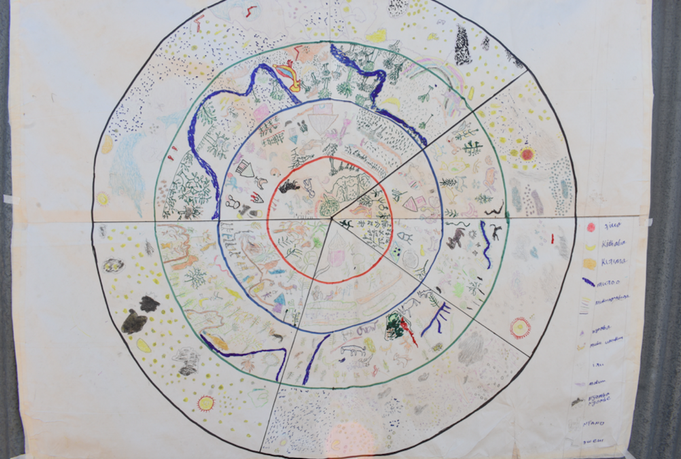 The ancestral calendars, drawn by seed custodians, mainly women, reveal how the seasons cycled through Tharaka Territory in the past. Deconstructing the imposed Gregorian Calendar, brought to Africa during colonisation, the calendar depicts the four traditional seasons in the Tharakan year and reveals the changes in weather, constellations, ecosystems and human rhythms that took place in each. The ancestral calendar shows a predictable, regular cycle free from climactic extremes, such as long dry spells.

Having mapped their memory of their ancestral territory in time and space, the group began the task of developing a shared picture of the present. This process enables communities to develop a comparative analysis with the past, identifying and debating positive and negative changes that have taken place. 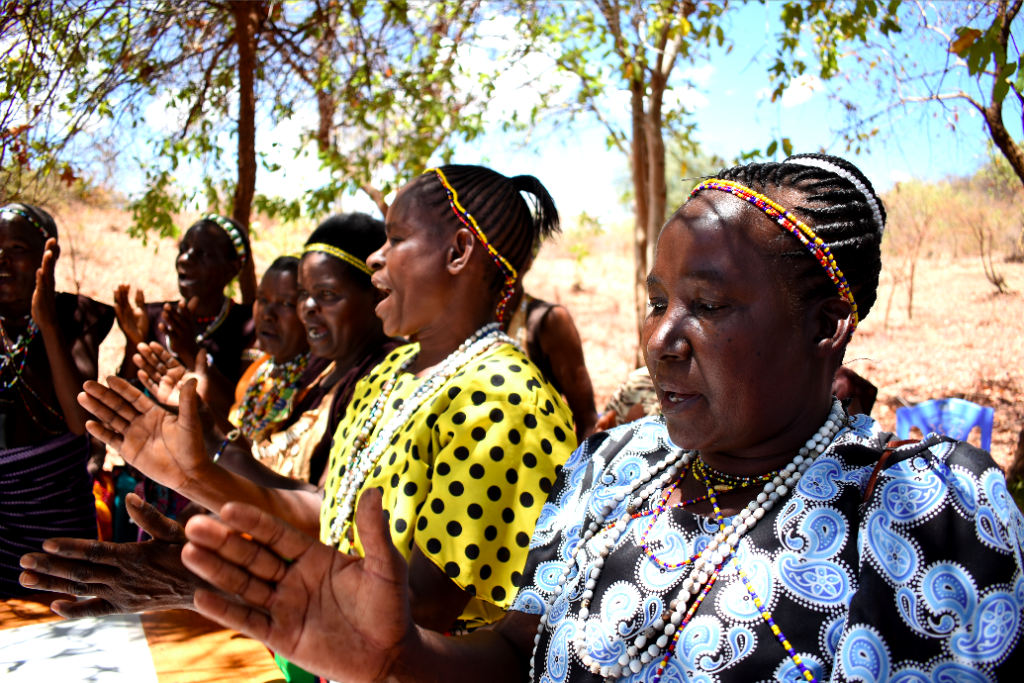 Elders discussed the devastating, intertwined erosion of culture and nature they have observed in their territory since colonisation and the neoliberal structural adjustment and globalisation that followed independence. They also raised concerns about the changing, unpredictable climate they are experiencing, and which is affecting every aspect of life in the territory. 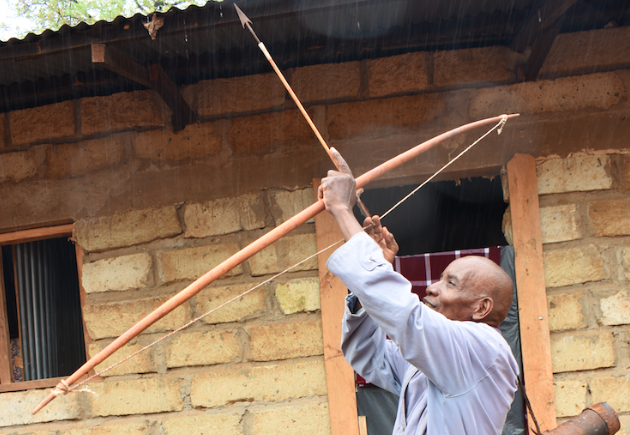 Andriano Murugu, pictured demonstrating traditional bow hunting, shared his despair at the near-total disappearance of elephants, rhino, lions, leopards, antelopes and other wildlife from Tharaka Traditional territory in his life time. He is in his 60s.

Andriano believes this is a direct result of an erosion of customary laws that once governed hunting, limiting what was hunted and when to sustain healthy populations of hunted animals. In response to the losses he has seen, Andriano has given up hunting and is attempting to conserve what remains in his forest small-holding. Recently illegal poachers raided his plot and killed five antelopes which he had been trying to protect. The mapping group supported Andriano’s urgent call for the community to collectively protect the animals they love and help them to return to the territory. 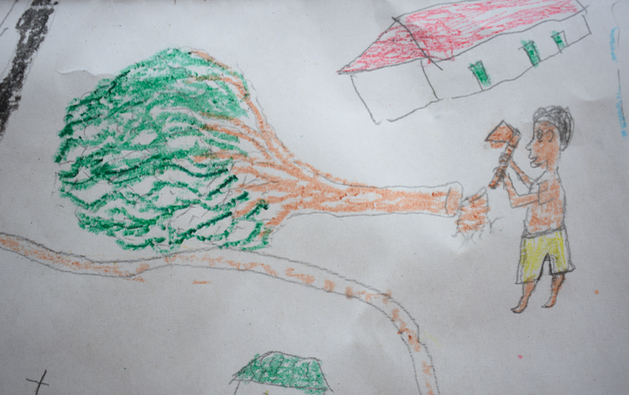 The present map also revealed extensive deforestation driven by agricultural expansion and charcoal burning. Dried rivers, dead animals, road building and related settlement, were also drawn. Depictions of the violation of sacred natural sites by infrastructure including bars and dams, and the arrival of churches and a fanatical version of Christianity indicate the concurrent and deeply-related erosion of customary ecological governance and traditional culture that has occurred. 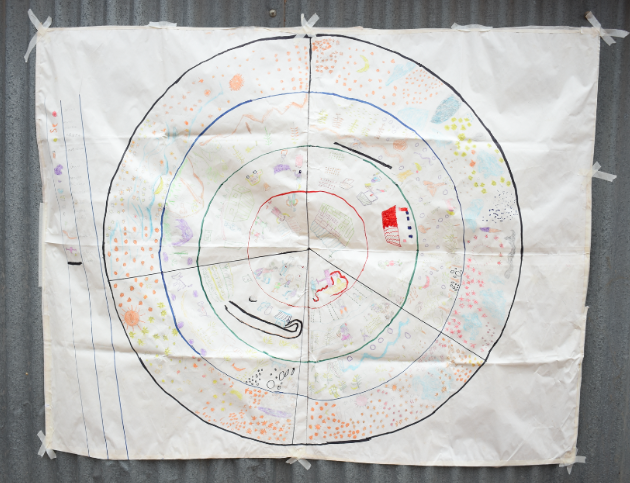 The calendar of the present corroborates the map’s depiction of ecological and social disorder and loss. The outer rings clearly reveal the impacts of climate change, with large suns, hot colours and a more erratic, intense distribution of weather phenomena across the seasons. Traditional seasonal activities and rituals have disappeared and been replaced by rituals and rhythms unrelated to the territory’s ecological cycles. Drought is striking crop monocultures hard, causing hunger, and western media has eroded cultural dress and identity.

Having made a painful comparison between the past and present, the group gathered in Tharaka began the process of drawing a map and calendar of the future.

The future map and calendar evoke aspirational visions that can help the community evoke, agree upon and distil the actions that will be necessary to revive their territories and traditions. They also affirm the steps the community has already been taking towards revival by revitalising indigenous seeds and foods, sacred natural sites rituals, songs, dances and traditional dress through community dialogues. 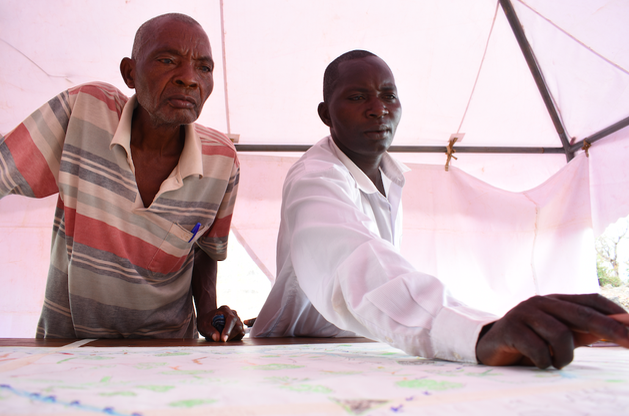 Drawing future maps and calendars is a joyous process, but also a complex negotiation of what is possible and what changes have arrived for good. Younger members of the community worked with their elders knowledge of the past to assess this challenge and develop their vision of the territory they want to live in, and to pass on to future generations. 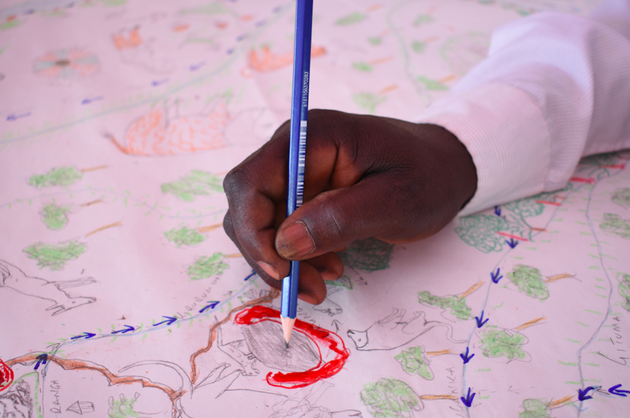 Tharaka’s future map depicts the restoration of sacred natural sites as a matter of urgency.  The return of year-round rivers to the territory, reforestation and the migration of wildlife back into the territory from Meru National Park to the north are all revealed as community priorities. A revival of climate-critical ecosystems is anticipated, while roads, schools, health centres and other new features from the present map remain in the territory.

The future calendar shows more stable climate conditions, year-round access to water, diversified traditional seeds and foods and farming techniques. These and other changes to the seasonal cycle will, according to the calendar, be made possible by the restoration of the territory’s ecosystems, the revival of customary laws and the resumption of rituals at sacred natural sites. 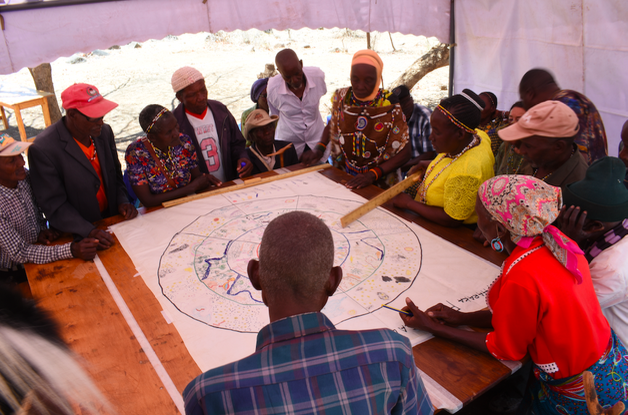 Having mapped their desired future, map and calendar makers presented their work to each other as a way of checking their meaning and accuracy. These presentations stimulated important discussions about the next steps for achieving the future visions embedded in the maps and calendars. The hope and determination inscribed on the maps and shared through the presentations was palpable.

Having invested time in the deep reflection needed to accurately map their territory in space and time, the community can use their finished maps and calendars as a basis for developing their ‘Life Path’, a longer journey, and for advocacy. These collective documents provide the factual basis for the community and their allies to press for recognition of their Indigenous rights, sacred natural sites and territories and the customary laws and governance systems that protect them. 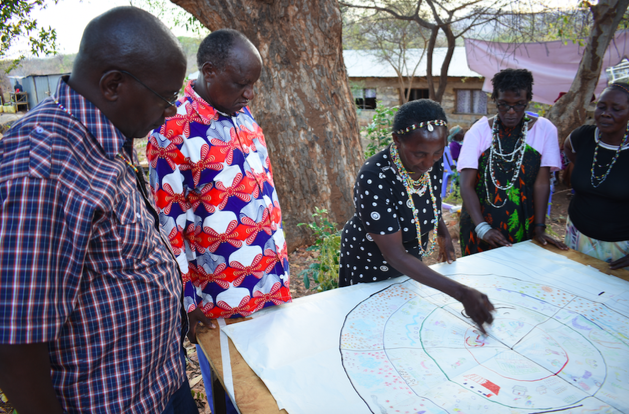 Tharakan custodians, elders and youth worked together to distil resolutions- immediate actions necessary for the community to realise their desired future. These resolutions identified other key stakeholders, such as local government officials, who might help the community make their vision a reality. These decision-makers were brought into the process. 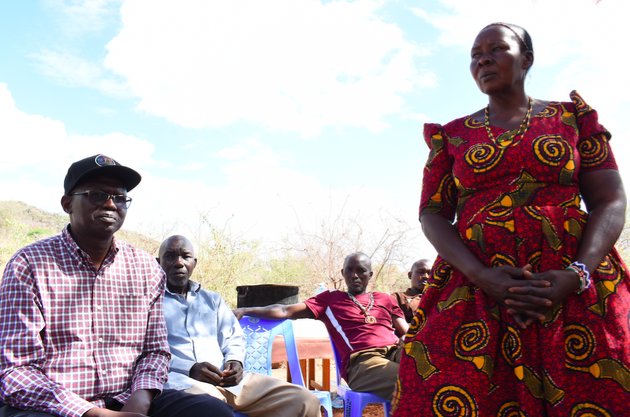 Ugandan custodians Kagole and Byenkya shared with their Kenya counterparts how they are using their own maps and calendars to advocate for  the protection of their territories from a surge in oil infrastructure. Through developing maps, resolutions, customary laws and clan constitutions they have developed strong shared positions advocating the protection of their sacred natural sites and ancestral lands.

They too have found allies in local government who share their concerns and are now willing to develop bylaws that will recognise the customary laws that protect sacred natural sites and other key ecosystems from oil development. Meanwhile, allies at national level have established a landmark new Rights of Nature clause in Uganda’s Environment Act that can back up custodian communities’ customary laws, which inherently recognise the rights of nature in their territory. This work is part of a multiple legal strategy that acknowledges the interdependence of rights. 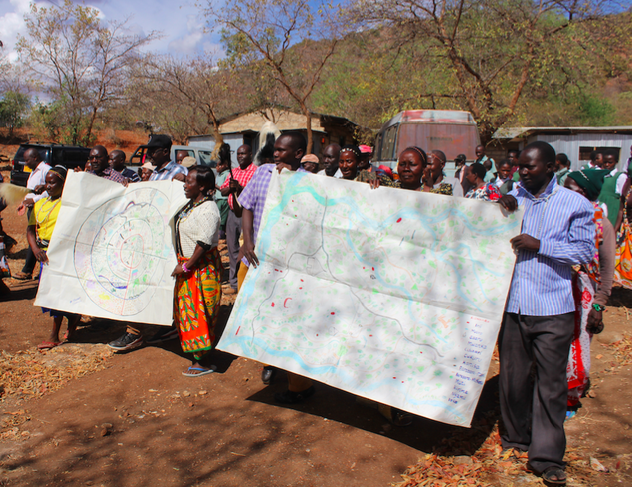 On the final day of the process, the communities presented their maps and calendars to political influencers, media, youth and their peers from across Tharaka. Their resolutions were read out in full and the next steps of practical collaboration laid down for achieving similar successes to those in process in Uganda.

Following in the footsteps of allies in Uganda and Kenya, community efforts to revive ecological knowledge, governance and ecosystems through dialogues, maps and calendars are beginning or underway in Benin, Zimbabwe, Democratic Republic of the Congo, Cameroon, Ethiopia and beyond. 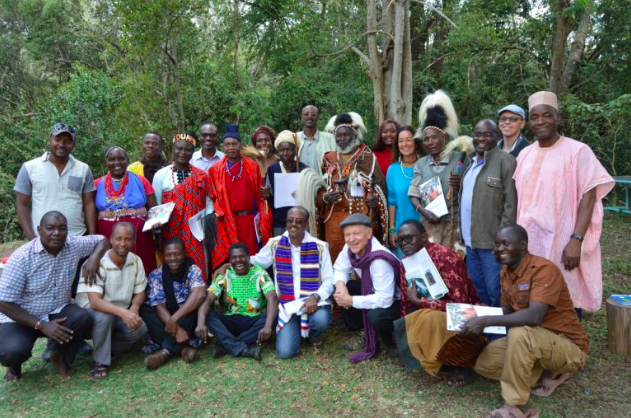 These communities are being accompanied by Earth Jurisprudence Practitioners- graduates of Gaia’s Trainings for Transformation. Their work combines community animation with collective efforts to secure greater recognition of customary governance systems for the protection of sacred natural sites and the territories of indigenous peoples, at regional and international levels. (Pictured: Africa’s first class of EJ Graduates in Nanyuki, Kenya. 2017.)

To date, custodians and EJ practitioners have joined forces to convince the International Union for the Conservation and the African Commission to adopt landmark resolutions defending sacred natural sites and territories, their custodians and ecological governance systems. 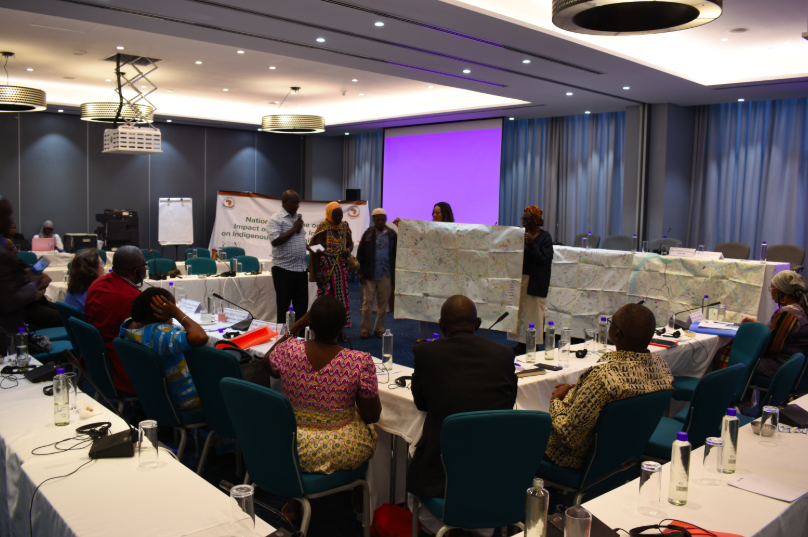 This high-level advocacy was further strengthened following the mapping process this October, as Tharakan elder custodians Nderi Kiobe and Salome Gautumi joined Simon Mitambo to present their fresh maps and calendars to the African Commission’s Expert Working Group on Indigenous Peoples (WGIP) in Nairobi. Ugandan custodians Kagole and Byenkya also presented the progress the Bagungu People have made.

Nderi and Salome’s presentation affirmed that the customary laws they are reviving stem from the Earth herself and that they must be respected under the African Charter’s call for African States to acknowledge Africa’s pluri-legal systems.

Combining forces, custodian communities and EJ Practitioners are building a movement for Earth-centred law and governance across Africa. It is a movement rooted in African lands, waters and cosmologies, but one that speaks powerfully to us all and a world in the midst of climate and ecological crisis.