An article by Hannibal Rhoades, originally published in Intercontinental Cry. 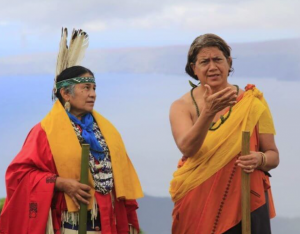 In a landmark move that adds wind to the sails of indigenous struggles to protect sacred lands everywhere, the International Union for the Conservation of Nature (IUCN) has passed a resolution declaring that all protected areas and the sacred lands of Indigenous Peoples should be ‘No-Go Areas’ for destructive industrial activities like mining, dam-building and logging.

The Motion urges governments to “respect all categories of IUCN protected areas as No-Go Areas for environmentally damaging industrial-scale activities and infrastructure development.” It also calls on businesses to “withdraw from exploration or activities in these areas, and not to conduct future activities in protected areas.”

The Motion’s success marks only the second time in history that the IUCN, the world’s largest conservation organization, has taken a sweeping global stand to protect nature from mining and other extractive industries. And this major precedent owes much to Indigenous Peoples.

As hundreds of indigenous nations gathered in a stunning alliance at Standing Rock last week, another diverse group of indigenous sacred site custodians made the trip to Honolulu. There they raised awareness of the critical importance of sacred lands in struggles to safeguard indigenous rights, protect nature and prevent runaway climate change.

Thanks to the work of these custodians and civil society allies, Motion 26, which had attracted significant opposition from within IUCN’s business membership before the Congress, passed almost unanimously.

Supported by the IUCN Council, the highest elected advisory body in the IUCN, the motion also got Yes votes from the governments of Russia, China and Canada. The USA abstained and Australia and South Africa both voted No to the motion.

Read the full article by Hannibal Rhoades on Intercontinental Cry.