As part of their journey to revive their Earth-centred culture and restore their territory, the Indigenous Bagungu People have been mapping their sacred lands along the shores of Itaka Lya Mwitanzigye (Lake Albert) in western Uganda. Earth Jurisprudence Practitioner Dennis Tabaro, who has accompanied the Bagungu since 2013, reflects on the long journey of decolonisation the Bagungu have undertaken.

Tell us about the Bagungu People and their history… 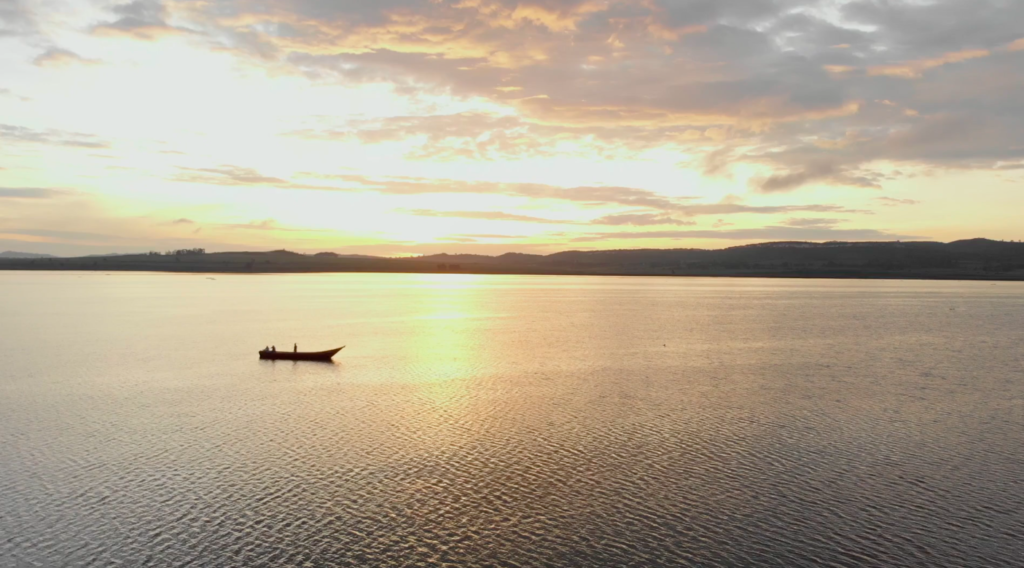 The Bagungu are Indigenous to the shores of Lake Albert, known traditionally as Itaka Lya Mwitanzigye, in the present Buliisa District, Western Uganda. Today the Bagungu are made up of 59 clans and 21 sub-clans, with members living in Buliisa, Masindi and Hoima Districts, which all lie one traditional kingdom- Bunyoro.

Bagungu culture and spirituality is underpinned by a close connection with Nature and their ecological way of governing their ancestral territory maintained a healthy landscape for many generations until more recent times.

Traditionally, clan leaders and the Balamansi/Balegezi- elders who are spiritual leaders and custodians of sacred sites, were highly respected. Balamansi means ‘people who pray for the Earth’. They have the power to interpret message from the ancestors and Nature and act as intermediaries between the human world, the spirit world and Nature.

How do the Balamansi maintain harmony between the Bagungu and the ecosystems they rely on?

Traditionally the Balamansi conduct prayers on behalf of the community to maintain healthy and balance in the community, good harvests, rain and vitality in the land, the lake and for all species. They also play a vital role in passing on and reinforcing the customary laws that governed all Bagungu interactions with Nature.

Much of the Balamansi’s important work is done at sacred natural sites (Mpuluma), which are natural places of great ecological importance and diversity, like wetlands, fish spawning areas and forests. Mwitanzigye, the sacred lake, is recognised as the major sacred natural site in the territory.

The work of the Balamansi is based on the understanding that the health of the sacred natural sites, the wider ecosystems and the the Bagungu are inextricably interconnected. The Bagungu understand that misfortune will befall those households who violate customary laws whose purpose is to maintain health of the lake. These laws are based on generations of observation and traditional knowledge. They guide people on what to do and not to do while near or in the lake, when to fish, or abstain from fishing so the lake remains healthy.

How did British colonialism in Uganda impact the Bagungu, their Balamansi, and the sacred territory? 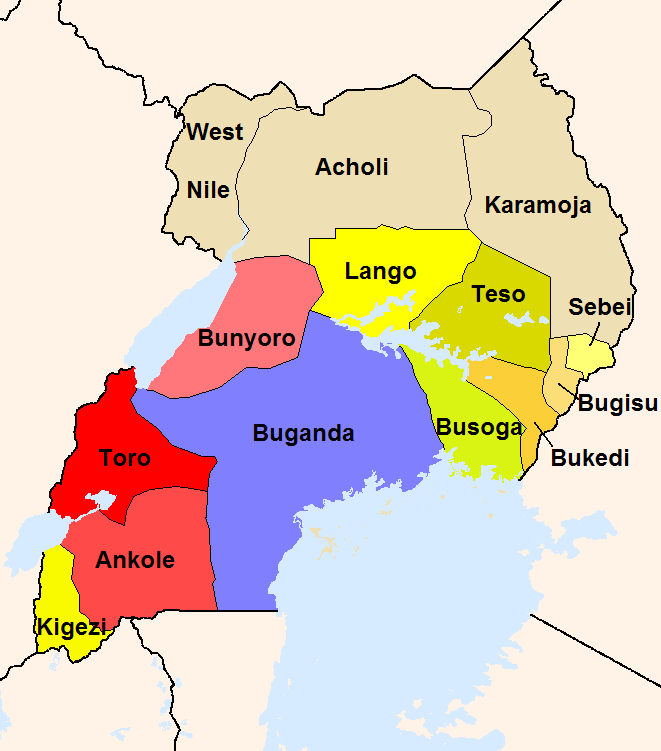 Map of Ugandan Kingdoms at the time of British Colonial rule. Bagungu traditional territories were located in the Bunyoro Kingdom. Image: Wikipedia

Like the whole of the Bunyoro Kingdom, the Bagungu resisted British colonial rule. But this resistance, led by the legendary Omukama Kabalega, was crushed in the end. Since then western colonial interventions, followed by a continuation of christianisation, acculturation and globalisation post-independence, have weakened Bagungu traditional culture and their spirituality.

These changes have resulted in the disappearance of many of the Balamansi and so of the whole culture. Those still with us are very old and are either performing the prayers and sacrifices in hiding or have given up the practices having suffered very serious repression and being labelled witches.

As a result of the loss of Balamansi and their knowledge, adherence to Bagungu customary laws has been impacted. At the same time, there has been industrialisation and large in-migration to Lake Albert. As a result of all this, many rivers have dried up, forests have been destroyed, wetlands have been turned into grazing land and gardens and the lake is severely overfished with stocks dropping dramatically.

Until recently, the elders and Balamansi who remain shared a sense of helplessness. One elder, Alon Kiiza, who is a custodian of an Mpuluma along the lakeshore, told me:

“I used to do rituals, giving seeds to the sacred site and the lake when my clan would bring the seeds to me. Now clan members do not listen to me and they no longer have the traditional seeds. How can I take seeds bought from the market, or those supplied by government to the sacred site? The ancestors will not accept them, they will disturb the site.”

The failure to perform seed rituals is associated with loss of the many seed varieties, which has led to diminishing of food security at household level, in the community and in the wider ecosystem. When the relationships held together by the traditions are broken the web of life begins to unravel and everyone in the community is affected.

How is this story changing now? 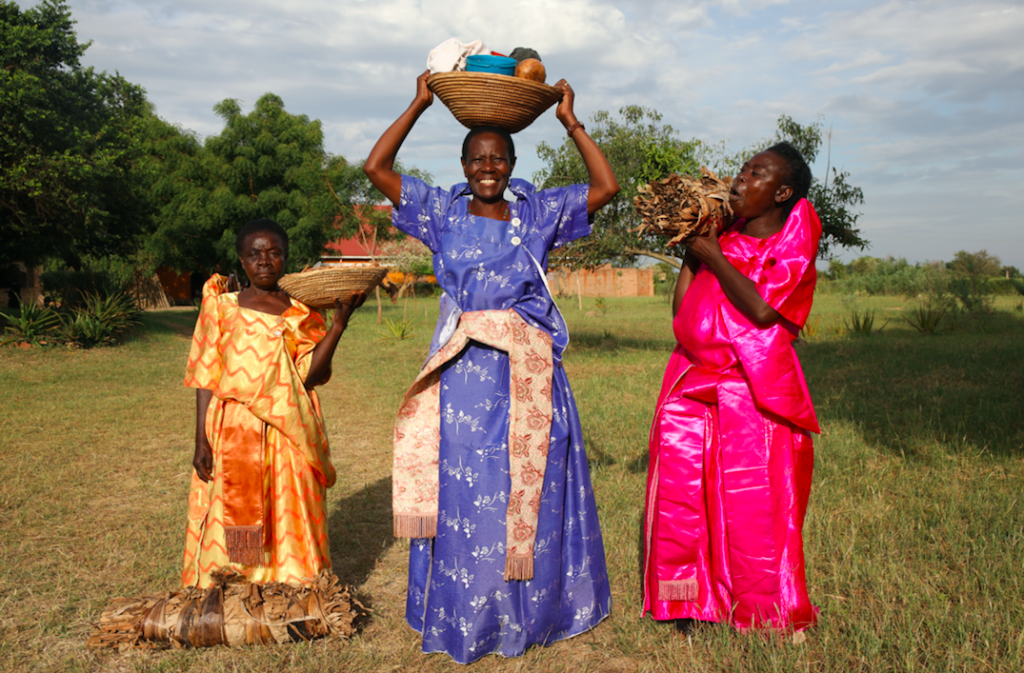 In the process of becoming an Earth Jurisprudence Practitioner I have begun a journey with these communities. Since 2013, I have been working with elders who might be interested to revive their knowledge and practices related to Mpulumas, ancestral lands and seed and agricultural traditions.

The journey began slowly. In the first year, the challenge was to identify the true custodians, but as they had been ridiculed and repressed for so long, many did not come forward. After some exploration, a custodian called Kagole Margaret came forward with a few others, still not willing to be publicly named as custodians. They shared stories of sadness and nostalgia, stories of remembering the collapse of life around them, and how it had been before when the land, the lake and the people were healthy and strong.

Things began to accelerate in 2015 when there was a meeting in Ethiopia for Custodians of Sacred Natural Sites organised by The Gaia Foundation. Kagole Margaret attended and returned enthusiastic to share that there are other sacred site custodians around the world. Her experience encouraged her and other custodians to be more bold.

What happened as confidence began to return?

Since then, we have been holding monthly dialogues with an ever-growing group of custodians which has increased from a small group of 8 custodians to over 30 custodians and clan leaders now. The dialogues focus on discussing ways and means of bringing back Bagungu traditional culture, starting with strengthening interactions with sacred sites and reviving traditional seed diversity, especially of those seeds needed for the rituals.

Through the dialogues, custodians have re-identified the names of their sites, the clans responsible for them and the type of rituals that need to be done at each to maintain their health. They have started performing the smaller rituals and are preparing for larger community rituals and sharing their knowledge with youth.

With the process of revival underway, what was the next step? 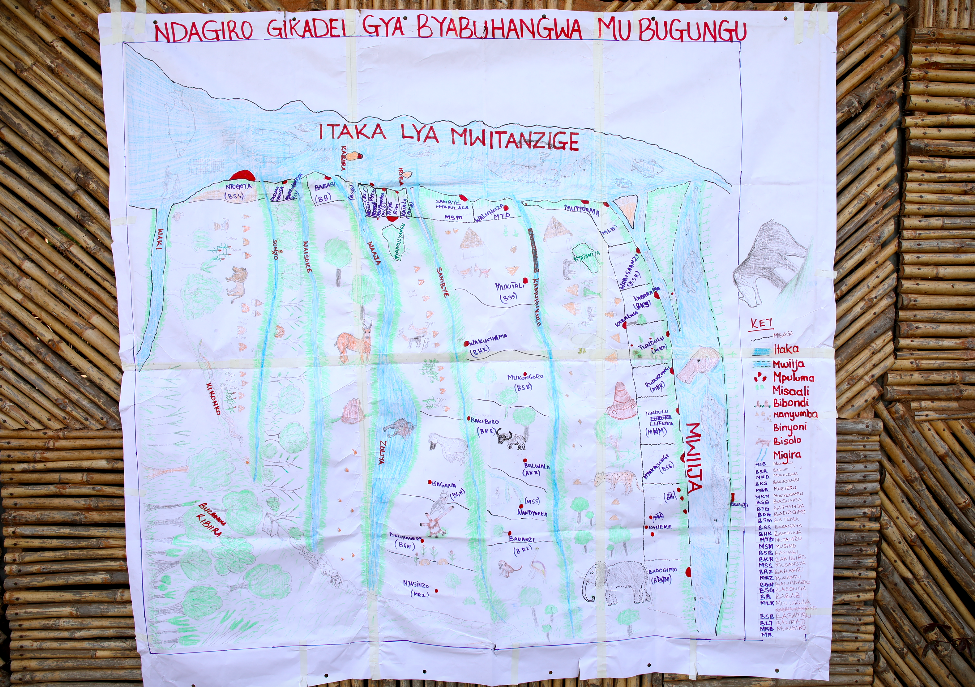 A map of Bagungu ancestral territory, drawn by elders and custodians. Photo: The Gaia Foundation

The next step in the process is to map the knowledge returning through the dialogues about the network of sacred natural sites and clan lands within the Bugungu ancestral territory. This process enables the clans to recall the original order of the territory as it was in the time of the ancestors, as a baseline they can use to envision how they can restore the land, the lake and traditional practices. The custodians need to work hand in hand with their clans to map the sacred sites and the related ecosystems.

In November (2018) a large groups of over 50 from the Bagungu came together to do this mapping and calendar-making together. They drew maps and calendars of  the past, the present and the future.

The past map they created showed the original order of the territory with abundant animals, fish and intact Mpuluma- a territory where Bagungu customary law functioned well. The present revealed all the chaos that has come from road building, loss of culture and now oil extraction, which threatens multiple sacred sites. This is the reality now.

In the future map the Bagungu show what they want to happen in future. The vision of the custodians is for the Bagungu to assert that the lake is a living being, not to be abused. They want to see wildlife return to the land and their customary ways of living and caring for Nature returning to govern the territory. This future map is like a community promise, it brings people together around this vision and allows them to think about the next step- how to make this future a reality.

Are there other uses for these maps and calendars?

Bagungu women with their eco-cultural maps and calendars. Photo: The Gaia Foundation

The maps make what is often invisible to outsiders- like Mpuluma and other sacred areas- visible, on the terms of the community. This means that when the maps are complete they can be used as tools to engage the government authorities in advocacy, for example in calling for formal recognition of Mpulumas and the role the Bagungu play in protecting them.

The custodians have been able to meet officials from the Bunyoro Kingdom and local government leaders, present their story and call for recognition they require to play their role as custodians of the territory. They have asserted that the sacred sites need to be recognised as no-go-areas for the growing oil mining industry. They are calling for mutual respect from other religious faiths and beliefs.

So far this advocacy has been well received. The Bunyoro Kingdom is supportive and the local district government has passed local ordinances in support of the Bagungu.

Is there support for this work beyond local level in Uganda? 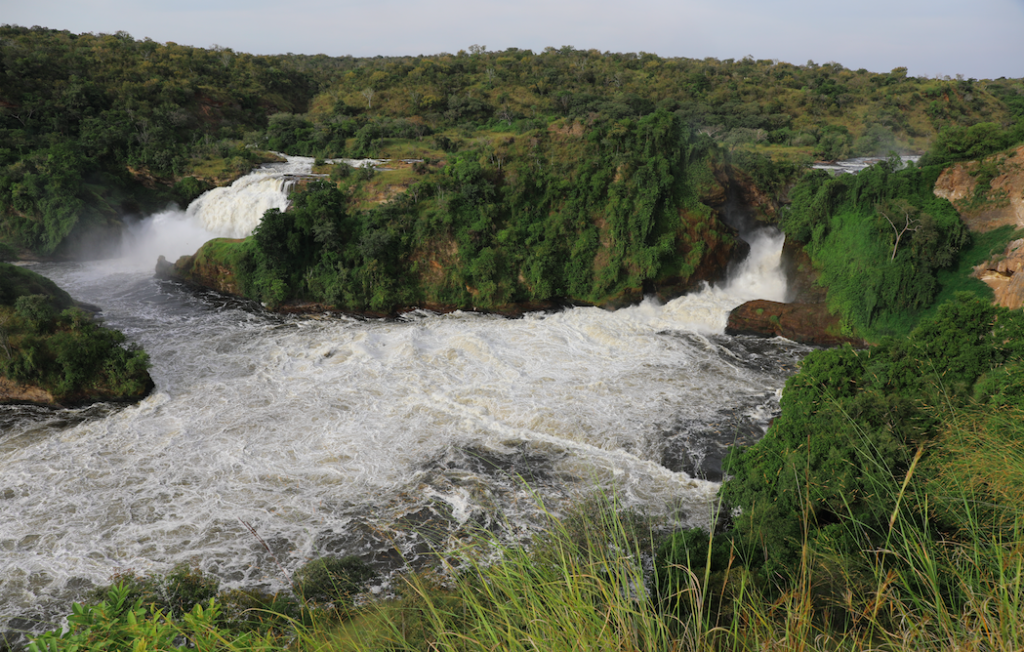 Kabalega Falls- one of the most sacred sites for the Bagungu. Photo: The Gaia Foundation

Last year Uganda became the first African nation to formally adopt Rights of Nature legislation at national level. Our Environment Act 2019 includes a recognition of Rights of Nature and this perspective, that Nature is alive and must be protected, is aligned with Bagungu traditional beliefs and governance.

Bagungu custodians, like Kagole Margaret, have been actively involved in getting more recognition for African indigenous peoples too. In 2017 she and other custodians played a role in convincing the African Commission to pass Resolution 372. This recognises sacred natural sites and territories and traditional custodial governance systems and compels African Governments to do the same.

There is a long way to go, but overall there is greater and greater recognition that we need to support and place trust in indigenous peoples like the Bagungu to protect African ecosystems. Doing this will also help undo many of the wrongs they have suffered in the past.

Watch Custodians of Life: reviving culture and Nature in Uganda’s Great Lakes to learn more about the Bagungu’s remarkable journey of decolonisation.

Dennis Tabaro Natukunda is one of the first 6 African Graduates from the Earth Jurisprudence Training, organised by The Gaia Foundation, and recognised by UN Harmony with Nature Initiative.