Tharaka: Communities come together to map their ancestral past

This September, elders and youth, men and women, from Tharaka came together in the foothills of Mount Kenya to document their ancestral past in the form of eco-cultural maps and calendars.

After five years working to revive and enhance their traditional knowledge and practices through regular community dialogues, the map and calendar-making was the next step in the community’s self-led process of cultural revival.

Accompanied by Gaia’s Kenyan partners SALT, and Earth Jurisprudence Practitioner Simon Mitambo, the Tharaka community is following in the footsteps of indigenous and land-based communities from the Amazon and other parts of Africa, to bring back the memory of ecosystems and cultural practices lost or damaged through the colonial process and all that has followed.

This photo story shares how, using eco-cultural maps and calendars, the Tharaka Community is building shared consciousness and community cohesion; opening their path to address the injustices and imbalances of the present and revive Nature and culture for future generations of all species.

Community dialogues are the backbone of the process the Tharaka Community is following to revive their culture  and restore their relationship with Nature. Bringing together women, men, and youth to learn from knowledgeable elders, these dialogues offer powerful spaces in which communities are inspired to regenerate their  traditional practices of collective analysis and reflection.

Through the dialogues, the Tharaka Community has found an opportunity to discuss the challenges they face; how things used to be and why they have changed; where the present disorder has come from and how to recover from it. 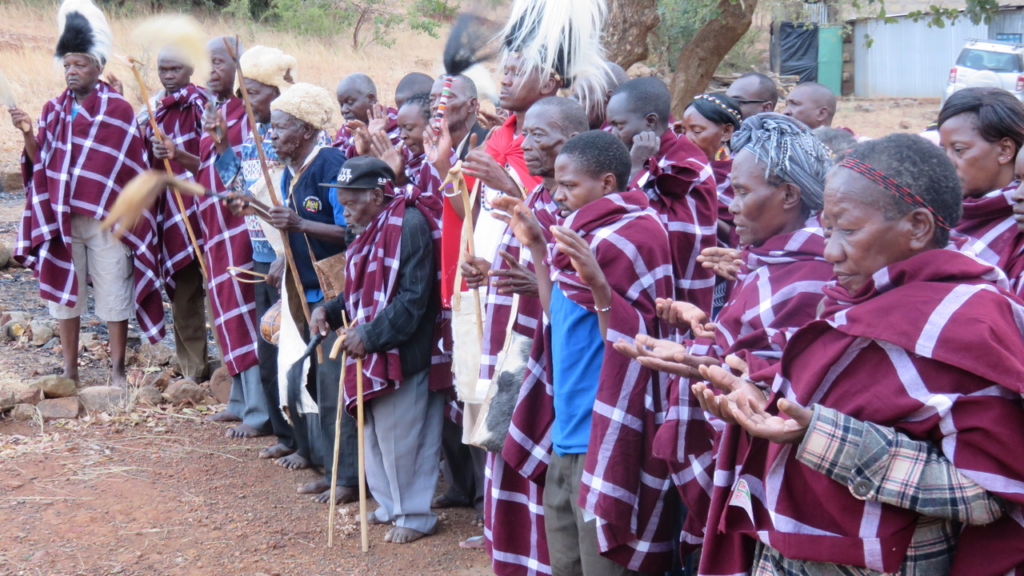 Following several years of regular dialogues, the Tharaka Community gathered to open and bless their next step- the making of maps and calendars. A traditional prayer was led by Mugwe, a Tharakan spiritual leader, and his assistants (those wearing sheepskin headwear, far left). The prayer called on the community’s ancestors to be with them, to help them recall their how things used to be before the disorder, and guide them in mapping their ancestral territory accurately. 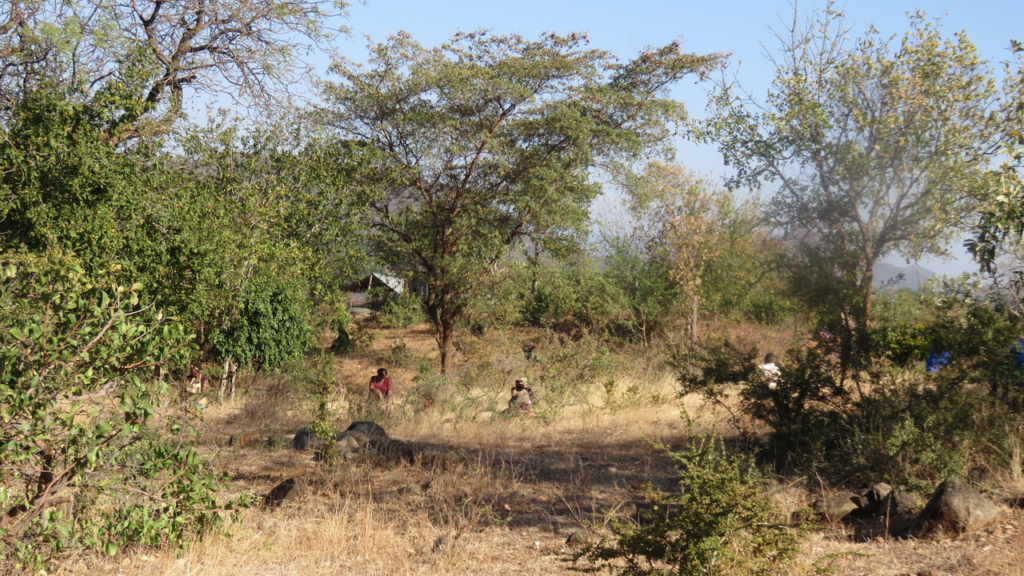 The prayer was followed  by a ‘Mystica’ – a practice borrowed and adapted from Brazilian social movement Movimento dos Trabalhadores Sem Terra (MST) – a ritual for greeting the land, becoming conscious of the other beings who call the territory home and asking the spirits of the land to participate in the mapping process, bringing forth the memory of the land itself.  Each morning participants had time to connect with the land, imagine how their ancestors once walked on this very soil, with all the others species of the land. The Tharaka Community enjoyed this time to be quietly with themselves and their ancestral territory.

Eco-cultural maps were first developed  by Indigenous communities in the Colombian Amazon, who were looking for ways to express their holistic view of the world. They are a practical and participatory tool for aiding the community to consolidate what they have learnt so far on their journey of reviving their memory of the ancestral territory.

The maps are called ‘talking maps’ because the images created by the community in the mapping process trigger people’s memory and spark debate, as the order of the territory comes back to life.  This is the baseline for restoring their traditional knowledge, practices and ecosystems.

In time, a community will map their territory as it was in the past, as it is in the present, and as they want it to be in the future. 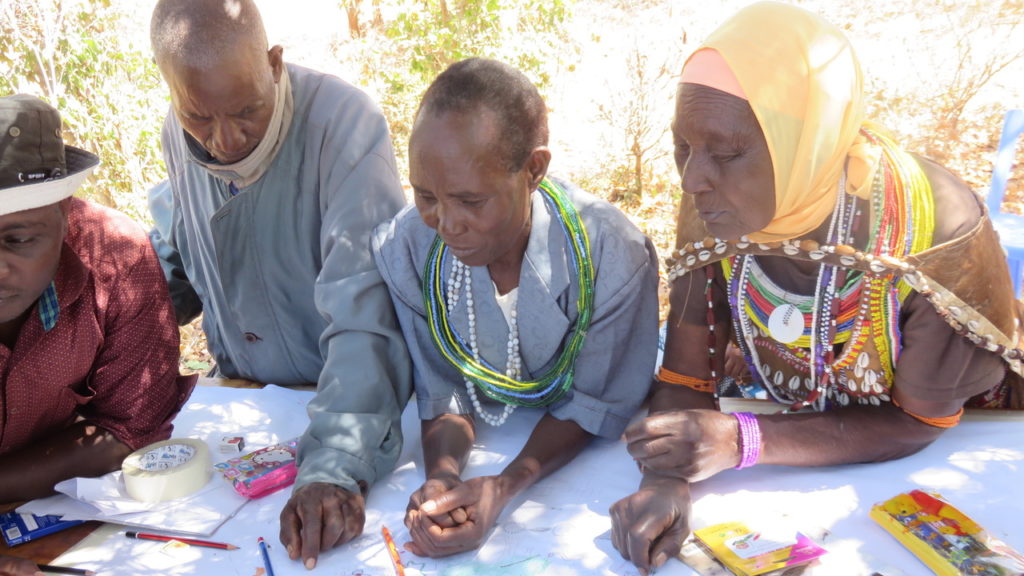 Here the Tharaka Community is developing a map of their ancestral territory. The elders are at the centre of these discussions and the young people listen intently, realising that they have much to learn, having learnt nothing of this at school. 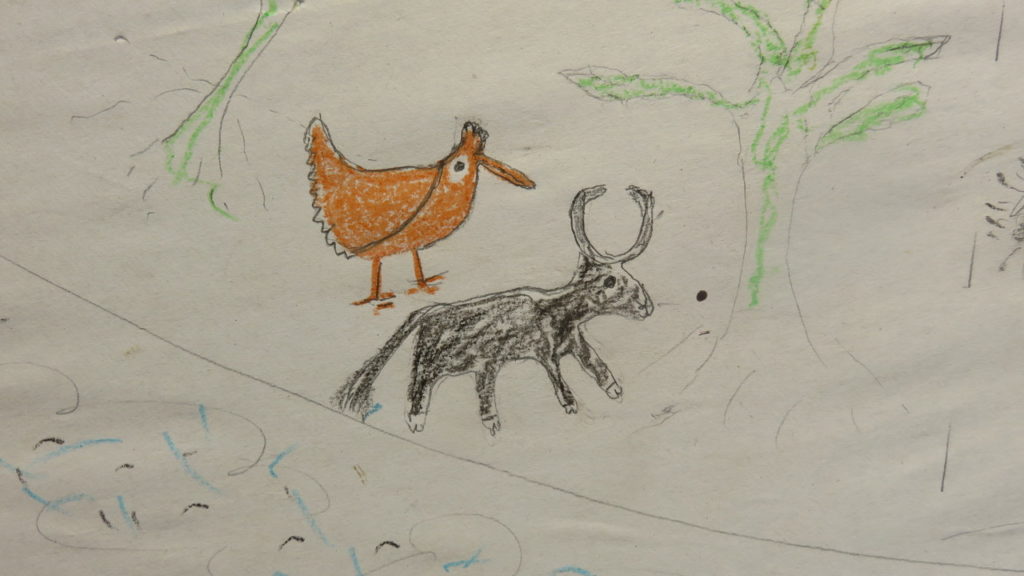 A buffalo and bird drawn by one of the Tharakan elders who had never held a pencil before.  She was thrilled when she found that it came so easily to her. For many elders, drawing the maps and calendars is itself an important process for re-building confidence. In this space their deep knowledge of the territory, and its governance according to ecological principles, is recognised by the community.

As one elder said: “I  feel as if I have been born again.  At last I can share what I know, and people are interested!“ 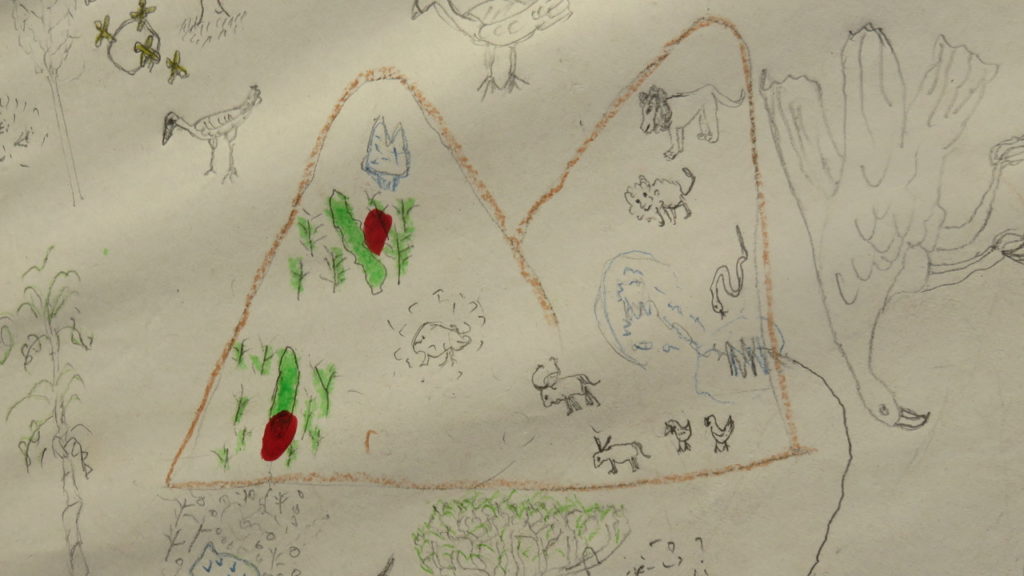 A representation of a local hill, home to two important sacred natural sites in the area, marked in red and green. The maps provide a graphic and holistic picture  of the elders’ memory. Like many communities across Africa, in Tharaka this memory was passed down the generations through oral storytelling. The ‘talking tools’ help to animate the passing of this knowledge.

The dynamic interplay between farming systems, wild nature and the climate is represented on the maps, reminding the community of the way their governance systems were derived from understandings of the laws of Nature and her cycles.

Eco-cultural calendars are developed alongside the maps, helping the community to remember how they traditionally ordered their activities over time, as the territory changed.

What signs in nature- from the position of the stars to the moisture of the soil- did the community look for  to tell them when to plant, harvest and undertake important rituals? The calendars help the community ask and answer these questions and revive traditional rhythms of life and cyclical concepts of time that have been obscured by the imposition of western calendars. 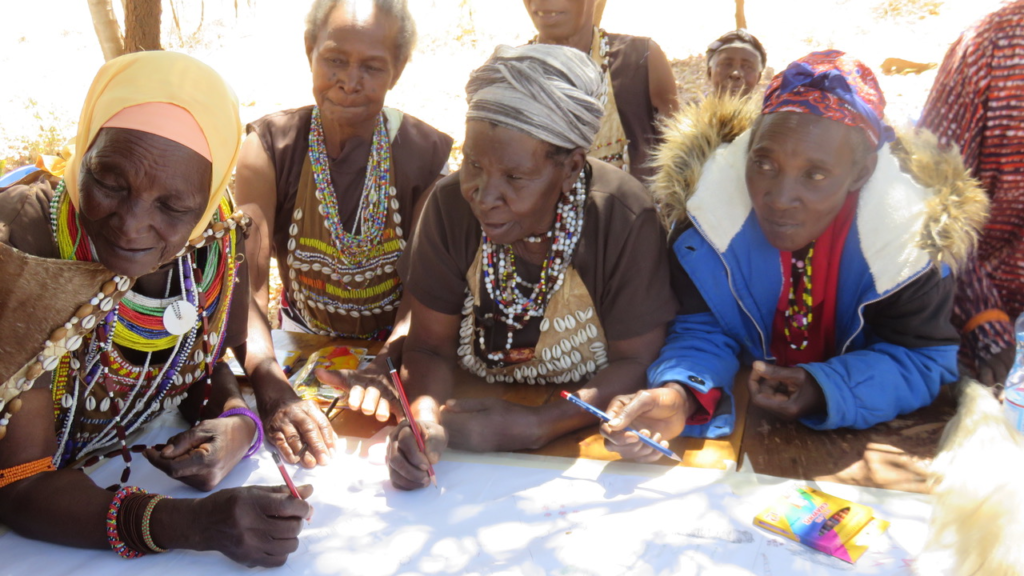 Women usually play a prominent role in developing the calendars. First they need to agree how many seasons there are , the traditional names for these seasons  and how their ecosystems indicate the transition from one time to another. 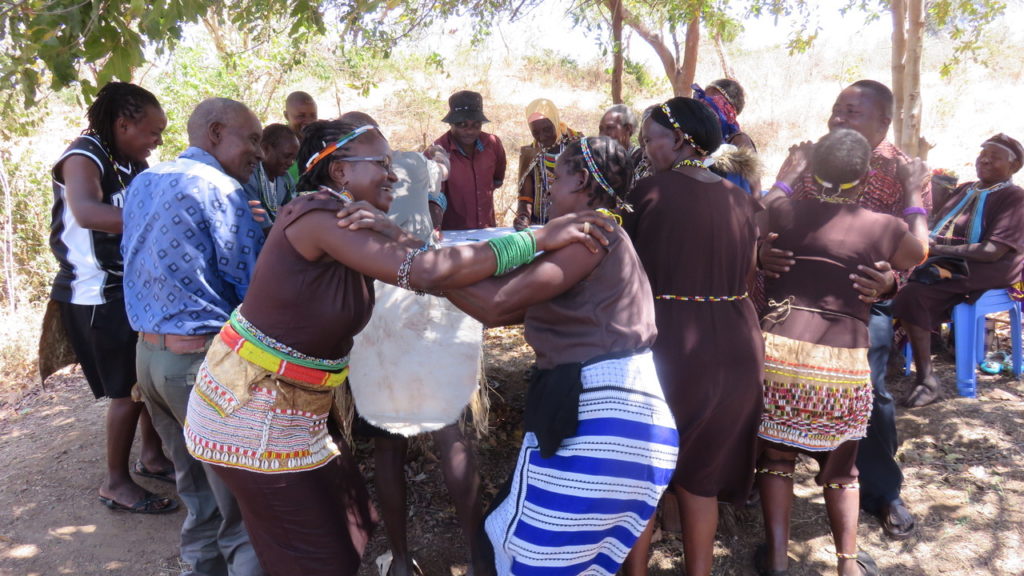 The process of remembering is a joyous one, and in Tharaka the women developing the calendar regularly burst into song and began to dance as they recalled the songs associated with various traditional seasonal activities. 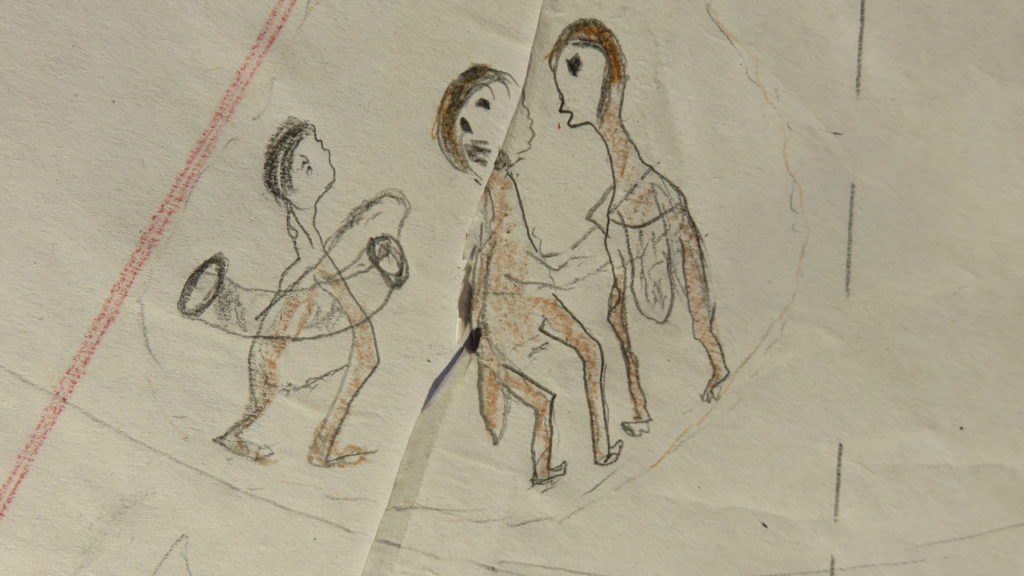 An illustration of a horn player and two dancers illustrates an important seasonal ritual involving music and dance- a moment when the Tharaka Community traditionally sought to connect with the wider community of life in the territory.

Dancing time and the territory

After several days of hard work and reflection, the Tharaka Community came together to present their maps and celebrate this milestone in their journey to revive their culture and Nature. 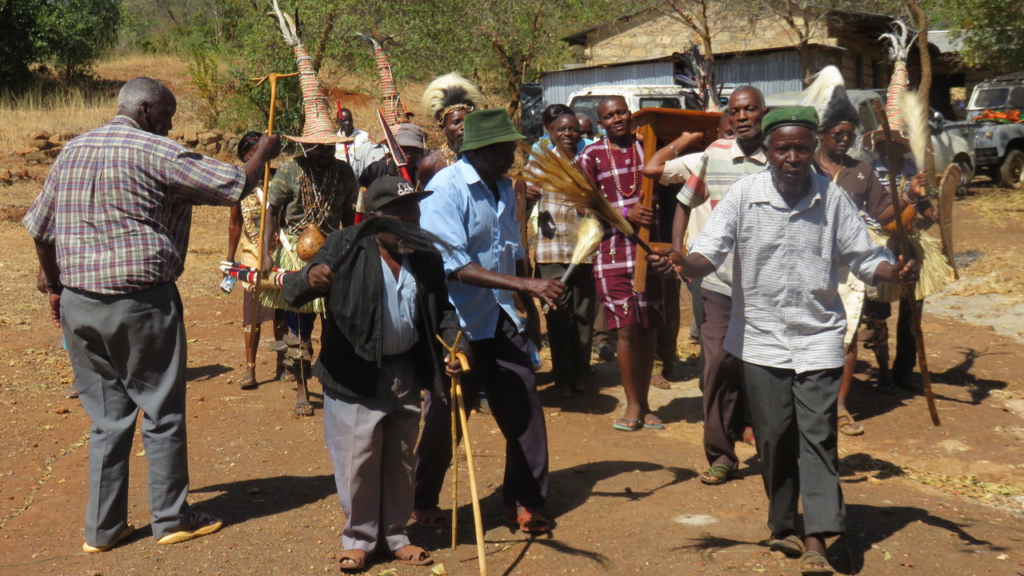 The community carried their maps and calendars to the place chosen for their presentation. The elders led the processions, animated  by the dancing group and musicians with horns and rattles. 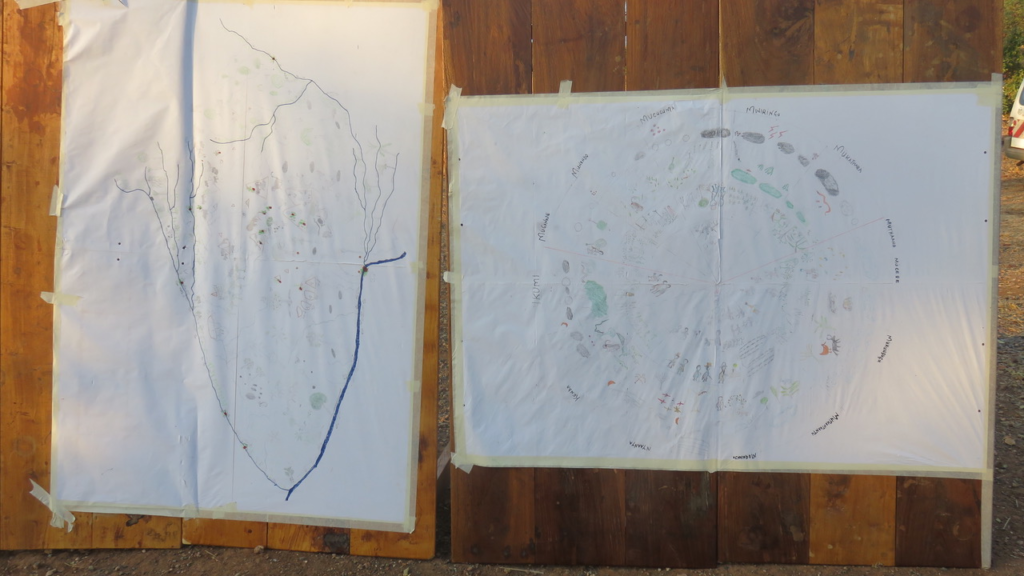 The two images of the territory- in space (map) and in time (calendar)- are placed next to one another in a place where the whole community can see their work. The talking tools that brought the community together are now an imprint of their collective memory. They have also highlighted the remaining gaps in the community’s knowledge, which they will need to dialogue about further.

The map and calendar are a baseline for the community, contextualising their future efforts to revive traditional practices, ecological governance systems and, as a result, the health of the territory itself. 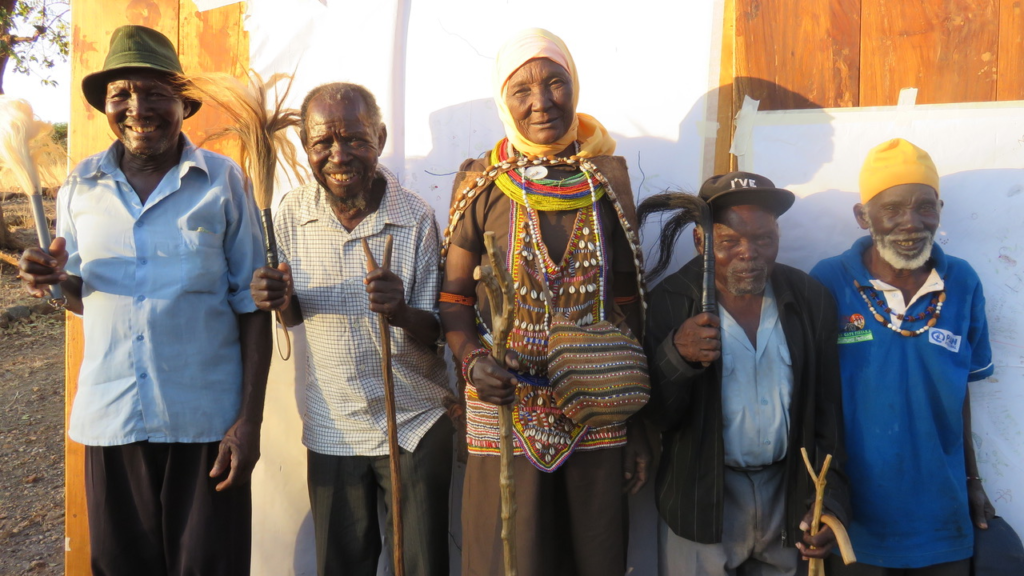 Important elders from the Tharaka Community gather for a celebratory photograph in front of the completed ancestral maps and calendars.

The Tharaka Community now holds a common and compelling picture – a baseline eco-cultural map and calendar – reminding them of where they come from; how their territory used to be; the activities indicated by the seasons, and the different roles of women and men, elders and youth, in farming, in the home, in the community, in the land and in the governance system.

The maps still require some refinement. In the next phase of their work, the Tharaka Community will begin meeting as clans to document their customary laws and traditional governance systems. Working with the elders of each clan, they will come together monthly, adding detail to the ancestral map over time.

Once the ancestral map is complete, and everyone is happy, the community will develop an eco-cultural map and calendar of the present; a process that helps reveal changes the land has undergone, how traditional knowledge, governance and the territory have changed and, often, been eroded by colonial exploitation and ongoing cultural and spiritual discrimination.

Developing this map of the present is generally a shock to the community when they see the contrast with the ancestral one. It spurs the communities on to do a map of the future, through which they are able to collectively identify the future they want.

Strengthened by years of dialogue and growing confidence, the community can then accelerate bold plans- their Life Path- for the further revival of their culture and their living territory- from reviving indigenous seed diversity to claiming official recognition of their custodianship of their lands, waters and sacred sites.