In the most important step for Amazon indigenous rights in 30 years, through a new decree, Colombia has recognised the autonomy of indigenous communities across the Amazon. 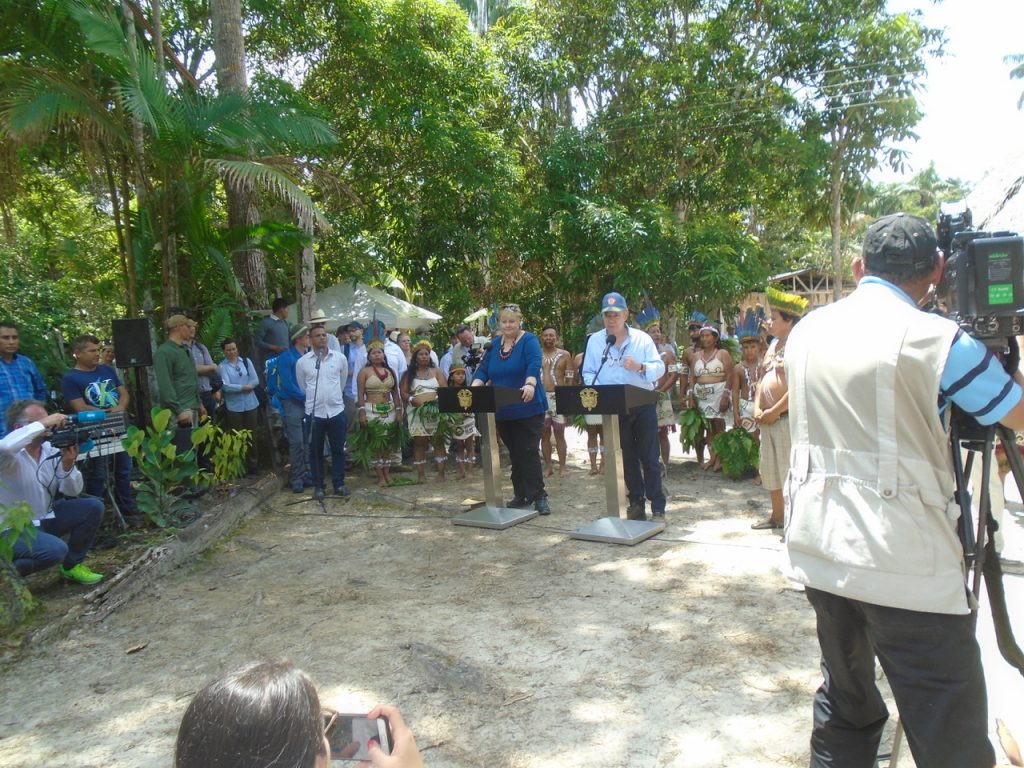 The new decree is presented by Indigenous leaders, President Santos of Colombia and Prime Minister of Norway, Erna Solberg.

On Tuesday 10th April, 30 years after indigenous communities in the Colombian Amazon received legal title to their lands, the government has signed a decree that ensures local governance over their territories.

“This is the most important thing that has happened to the indigenous Amazonians in 30 years,” said Martin von Hildebrand, founder of Gaia Amazonas, who has devoted his life to the protection of the Colombian Amazon, working for over 45 years alongside indigenous groups for the recognition of their rights.

In the Amazon city of Leticia, Colombian President Juan Manuel Santos signed a Decree of Non-Municipalized Areas, in the presence of local indigenous leaders, and accompanied by the Prime Minister of Norway, Erna Solberg.

The decree strengthens the autonomy of indigenous peoples of Guainía, Vaupés and Amazonas, three political-administrative departments of Colombia’s Amazon region. It effectively allows indigenous communities, through their Associations of Traditional Indigenous Authorities, to execute and administer state resources, without intermediaries, and was welcomed widely by local indigenous leaders present at the signing of the decree:

“Right now, we are content because we will have a legitimate autonomy and self-government. It is a recognition by the government of our fundamental rights”, said Libardo Bolivar Martín, from the Tatuyo ethnic group.

“This decree is an opportunity for us to govern our own territory with our own policies; and we now have a responsibility with the state for the administration of state funds”, said Guillermo Rodriguez Macuna of the Association of Traditional Authorities of Pirá Paraná River (ACAIPI), Vaupés.

“We are very pleased. This is a step forward that we have been fighting for over many years, and the responsibility going forward is now in our hands, and we are organised to administrate education, health and our own system of governance”, said Felix Matapí of the Association of Indigenous Captains of Mirití Amazonas (ACIMA), Amazonas.

“This is an historic moment for us. This decree is a legal instrument that relates to our autonomy and decentralisation. This regulatory decree is also important for the defence of our territory and biodiversity”, said Dario Silva Cubeo, of the Indigenous Association of La Pedrera Amazonas (AIPEA), of the Lower Caquetá River, Amazonas

This historic decree is three decades in the making. In 1988, the Colombian government of Virgilio Barco made a historic move in returning more than 18 million hectares of Amazon territory to indigenous communities – a figure that has since increased to more than 26 million hectares. Another important step was taken in the 1991 Constitution’s recognition of Colombia as a multi-ethnic and pluricultural nation. However, while the Amazon was divided into political-administrative departments and municipalities, the indigenous territories remained ‘non-municipalized areas’ – 37.6% of the Colombian Amazon did not have a local government, or at least not one which was formally recognized.

During the signing ceremony, President Santos acknowledged the fundamental role of indigenous peoples as guardians of the environment and explained that they are the ones “most interested in conserving their forests, in conserving their rivers, in not contaminating, they are our best allies; that is why it is very important to see their autonomy, which today we give them, with the preservation of our environment.”

President Santos also referred in his speech to von Hildebrand´s work as being instrumental to this decree for indigenous groups of the Colombian Amazon to govern their lands, according to their worldview and customs; and being persistent in explaining how strengthening the governance of these ethnic groups is key for protecting the forest.

This new decree is a major part of President Santos’ governmental plan to safeguard the Colombian Amazon, which includes expanding Chiribiquete National Park by an additional 3 million hectares to establish limits for the agricultural frontier and colonisation.

Colombia can now claim that 85% of its Amazon territory is under some form of protection. That fact, alongside the recent ruling by Colombia’s Supreme Court of Justice on the Amazon as being subject of rights, and the peace agreement reached with the FARC guerrilla, are important steps for a better world, for future generations.

In the early 1980s the Colombian Amazon was the best-preserved region of the immense Amazon Basin. The economic boom of the cocaine industry that swept over the eastern parts of the Colombian rainforest, and the presence of a guerrilla movement in the region was just beginning. The agricultural frontier was at the piedemonte, the Andean foothills of Colombia, there was little colonization because miners were more interested in Brazil and Venezuela, and petroleum exploration was concentrated in the Ecuadorian and Peruvian Amazon.

By the end of the 1980s, the government of President Virgilio Barco Vargas had recognized the territorial rights of indigenous people over 20 million hectares of the Colombian Amazon – an area they already occupied prior to the Spanish Conquest. During the same period, a new Constitution was being drafted in Colombia (adopted in 1991), which included, in addition to territorial rights, the right for indigenous people to govern their territories as part of the State political-administrative structure, with State funding.

The new Constitution of 1991 opened a pathway for indigenous administration of their territories (resguardos) as legal entities. A wide array of activities and cooperation unfolded in the Colombian Amazon, to support the region’s 62 ethnic groups in exercising their rights and acquiring the necessary skills to articulate themselves within the State framework based on their own cultural values. In particular, the COAMA alliance[1] (honoured with the Right Livelihood Award in 1999) was established, to enable indigenous people to reassert themselves as custodians of the Colombian Amazon and its biodiversity. By establishing their own Associations of Traditional Indigenous Authorities (AATIs), indigenous peoples began a process of demonstrating a level of local organization compatible to the State governance system. COAMA, led by Martín von Hildebrand and Gaia Amazonas, accompanied these processes and were adapting their support in accordance with the “life-plans” being developed by the indigenous peoples.

Fast forward more than two decades to the Decree of Non-Municipalized Areas, signed by the Presidency, the Ministries of the Interior, Finance and Agriculture, the DANE and the DNP, on 10th April 2018. The decree puts an end to the legal limbo of ‘territorial ordering’ that prevented the indigenous population, in effect, from governing what is theirs. It recognizes the autonomy of indigenous ‘resguardos’ (indigenous territories) that cover 26 million hectares of Colombian rainforest that remains practically intact.

The decree, which has been eight years waiting for signature, passing from ministry to ministry, establishes the relationship between the governments of the indigenous peoples located in ‘non-municipalized areas’ of Guainía, Vaupés and Amazonas, and other entities of the national and departmental governments. It means that indigenous communities in Guainía, Vaupés and Amazonas will now be able to operate as local governments, to execute and administer State funding. Resources will reach indigenous hands directly, which, with technical help from the national government or non-government organisations such as Gaia Amazonas, will administer them and invest them in their territories.

Nonetheless, despite this intense process by the indigenous people of consolidating and governing the resguardos of the Colombian Amazon, new threats are emerging in post-conflict Colombia. At the forefront are the enormous mining interests.

[1] COAMA (Consolidation of the Colombian Amazon), established in 1989 by Gaia Amazonas, Fundación Puerto Rastrojo, Fundación Etnollano, CECOIN, The Gaia Foundation and other non-government organisations, has been one of the most applauded actions for tropical forest conservation worldwide due to its achievements with and for indigenous peoples.

*Martín von Hildebrand, often referred to as “the vanguard for indigenous rights and preservation of the Amazon”, is founder of Gaia Amazonas Foundation. He has dedicated his life since 1970 to the defence and promotion of the rights of indigenous peoples and to the conservation of the Colombian Amazon. In addition to many accolades for the breath of his accomplishment, Hildebrand received Colombia’s National Environmental Prize in 1999, the Swedish Right Livelihood Award in 1999, the Skoll Foundation’s Social Entrepreneur Award in 2009 and the World Economic Forum Social Entrepreneur Award in 2009.