Crammed in to our trusty minibus in the jungle heat, our long journey to the Southeast of Mexico seemed endless. We travelled for hours on unnaturally straight roads, cutting straight through the otherwise undisturbed and barely penetrable rainforest of the Yucatan peninsula – home of the Mayans. 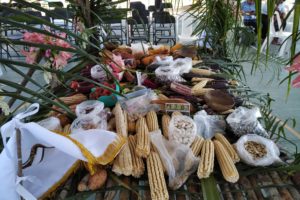 From the 21st to the 24th March, I attended the National Assembly for the Red en Defensa del Maíz (Network in Defense of Maize). I accompanied leaders from San Isidro community in Jalisco, Mexico, one of the resilient communities featured in Gaia’s photographic project, We Feed the World. This large event involving hundreds of Mexican farmers, indigenous communities, activists and organisations took place in the Mayan community of Sahcabchen, Hopelchen, Campeche. 300 people came from all corners of Mexico to discuss protecting their territory and the defense of their most sacred crop, maize – both inextricably linked.

La Red en Defensa del Maíz began in 2001 as a reaction to the threat of GM maize being cultivated in Mexico. It was precisely in 2001 that scientists found GM contamination of indigenous maize varieties in Oaxaca, at a time when it was illegal to grow GM corn in Mexico. As the origin of maize and its wild ancestor, teosinte, Mexico holds a rich diversity of maize varieties (64 registered landraces) but this is threatened by GM contamination that would and already has diluted and interfered with indigenous maize DNA. This diversity is absolutely key for future food sovereignty and corn production not only in Mexico but worldwide, especially in a time of increased climatic uncertainty.

However, over the past few decades maize has increasingly been hijacked by corporations to serve their own interests rather than feed the people. Mexico produces far more maize than it consumes but, since the NAFTA trade deal in 1994, today it manages to import at least 10 million kg of mostly unlabelled GM maize from the US (not for human consumption but for corn syrup or animal feed in factory farms). 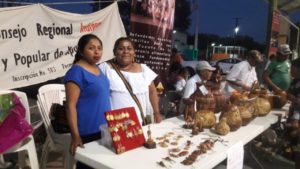 The community of Sahcabchen welcomed us with a magnificent display of hospitality, opening with a colourful, festive procession accompanied by a band and incredible food, straight from the Milpa (the polyculture fields of corn, squash, beans, chillies and many other crops). The habanero (scotch bonnet chilli) salsas that accompanied breakfast on the first day came as a little bit of a shock!

Throughout the 3 days we enjoyed a rich variety of maize based dishes – panuchos, tamales, pozole, recado negro and cochinita pibil (all with handmade tortillas), just to name a few. Markets of seeds, local crafts, a concert, talks, debates and documentary screenings all took place over the weekend. The community of San Isidro displayed a selection of their We Feed the World photos that they received, telling some of the strong farming stories of communities from across the globe. 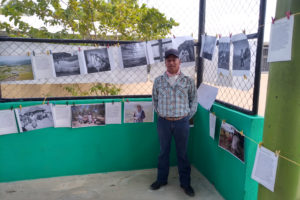 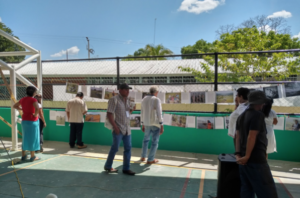 The assembly began with Mayan rituals giving thanks to the 5 cardinal points (including the centre), after each community contributed an offering of seed to the altar. Speeches and experiences were shared from each community, explaining their issues related to corn, the defense of territory, the upholding of community and the current political landscape. Powerful and animated Huichol, Chol and Mayan leaders, beekeepers, farmers and activists took the microphone to share their struggles through their poetic storytelling – each story with its own moral and lessons.

The main focus of talks was the looming crisis on the peninsula: Despite the new president’s rhetoric to represent the people, AMLO seems set on delivering the ‘Tren “Maya”’, a megaproject consisting of a tourist train connecting five states (Campeche, Yucatan, Quintana Roo, Tabasco and Chiapas), and in its wake bulldozing the vast swathes of the pristine forest that I so marvelled at upon arrival. Without proper consultation with the Mayan people, the megaproject is set to go ahead, displacing many communities, and there is unofficial talk of creating up to 40 new “eco cities”; potentially turning the Mayans’ homeland into a tourist park for the rich. Mayans avoided using the name “Tren Maya”, considering it an offence to their culture, instead preferring “Tren Neocolonial”. 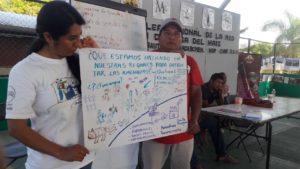 Big interests, powerful countries and companies have their eyes on the peninsula. Near the community of Sahcabchen, American, South Korean and Japanese companies have been prospecting land. Meanwhile, communities across Mexico seem to be increasingly undermined by government programmes, increased efforts to individualise and break up communal land tenures and the steady advance of agroindustry into communal lands. 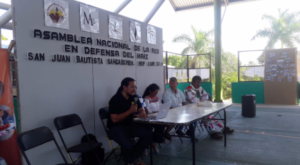 However, the people remain strong and organised. Inspirational leaders voiced their ideas, told of their successes and put forward their proposals for action. From Quintana Roo, Aniceto Velazquez, an elder in his 60s explained in Mayan; how as a young man he had stopped cultivating maize and left for the city life. He studied and learnt how to read and write but, paradoxically, through his education he lost his language and his heritage. He worked in government for many decades until 6 years ago, when he decided he would never be a “slave for anyone else anymore” and returned to his community, once again sowing the ancestral corn that would feed him for the rest of the year. He asked himself and the assembly, “when did we get used to eating such hard processed tortillas?”. Now an active spokesperson for his community and a teacher of the Mayan language, he also runs a radio station in Mayan. At the end of his speech he declared that ultimately the resistance starts in the home, in the field, and with the seed passed down from generation to generation since the first peoples of Mexico.

The Assembly closed with a ceremony around the altar of maize and shortly afterwards each community took their offering of seeds from the altar to distribute amongst the other attendees. I came away with white maize from Sahcabchen, wild tomatoes, white beans from Yucatan and squash seeds from Chiapas. I also left with the promise to sow this sacred seed and continue the long hereditary line of resistance. When I return home, this seed will end up in the hands of farmers from the Southwest Seed Savers Cooperative, who take part in the UK and Ireland Seed Programme, which despite all the adversities (and the more local but related attacks on seed), is also sowing seeds of hope and defending the diversity of our food system. 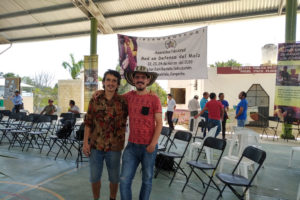