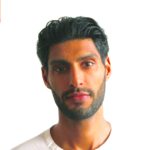 digital technology, we speak to Alnoor Ladha, a founding member of The Rules, about culture, technology and the cannibalistic economic system consuming life on Earth,

Tell us a bit about yourself and your work with The Rules?

We (The Rules) try to connect the dots between the various issues that are happening in the world to reveal the underlying antagonist: the economic operating system itself. We work to help popularise more radical ideas into the mainstream, and make them feel like common sense. We also work directly with social movements in a supporting role. By focusing on both the meta worldview and local struggles, it helps us better see how we are not just fighting a land rights struggle in India, or tax justice struggle in Kenya, or a pipeline in North Dakota; but rather, we are fighting the logic of neoliberal capitalism itself.

How do you see digital technology fitting into that logic? Is it more part of the problem, or is it a solution?

The moral question we must ask ourselves is what do we want our relationship with technology to be: individually, as a community, and at a societal level? Do I believe technology is out of control and a huge part of the problem? Yes. Of course. However, it is unfeasible to think we can return to a society without technology. At least before collapse.

It’s always a good idea to start with a Terence McKenna quote: “culture is not your friend” he reminded us. Culture is a set of calcified beliefs that are ratified by our complacency to challenge these norms. Are we going to examine our privilege? Are we going to try to comprehend or feel the destruction which is being reaped on our planet? This destruction is directly proportionate to the benefits received by those countries (and pre-nation state geographies) that have had a 5000-year head-start in totalitarian agriculture, 1000 years of colonialism, imperialism, slavery and genocide. We are the heirs of that legacy. As Thomas Pogge points out, how can we reap the fruits of our ancestor’s sins but not inherent any of the responsibility?

Once we have come to the conclusion that we do not want to make this bargain, we become critical of the culture that has incubated our ignorance. The moral position around technology is then not ‘how do I walk away from technology’, but rather ‘how do we become less dependent on- and synthesise the best aspects of it to build transition infrastructure to post-capitalist worlds?”

The Rules has used the concept of the ‘Wetkio’ virus as a means of describing the way destructive cultures emerge, operate and, perhaps, develop technologies, Could you describe what the Wetiko virus is?

Wetiko is an ancient concept coming from various First Nations’ traditions in North America. Wetiko was a word that existed before the term cannibalism. When there was famine among tribes or a tribe member found themselves alone in the wilderness and ended up eating another person’s flesh, the result was the Wetiko disease. There were two main outcomes of Wetiko: one was the unnatural desire to continue to eat more flesh even when there was an abundance of food, and the other was an icy heart and lack of empathy. Something shifts in you once you taste the flesh of your brethren for the first time. The mind-virus of capitalism is the logical outcome and heir of Wetiko.

We went from trusting the bounty of our Mother when were hunter-gatherers to becoming sedentary extractors of the land and seeing it as a resource rather than the source of all life. At this moment we become the ungrateful, cannibalistic children of Gaia

Technology is an aspect of a culture that is born out of the Wetiko virus. Technology is a subservient subset of the economic system. And the operating system is dependent on its prime directive of growth. Economists and politicians tell us the global economy must grow by 3% a year just to stay afloat. At this rate the global economy doubles in size every 20 years, which is of course, unfathomable. And yet the system straight-jackets us into believing there is no other option. We are paralysed. Our economic system is a form of distributed fascism where we have all become carriers of Wetiko.

How can we free ourselves of this destructive virus?

The first step is to dis-identify with your host culture. Patriotism, nationalism and all forms of rigid ideology play a brutal role in our indoctrination and complicity with the system. One of the potential antidotes is to start becoming self-aware of the true history of humanity, Western culture and technology. The great leaps in progress that we have observed did not happen independent of great plunder, destruction, war, violence and rape. One has to start asking first principle questions such as: What is the role of technology in serving its master, Capital? What is the logic of the market economy? The answer is all around us. The logic of capitalism is short-termist, greedy, extractive and life-destroying.

The second step is to start seeing technology as the offspring of culture. If we see technology as a by-product of culture and capitalism, then we can shift the way we interact with technology.

Perhaps we will start asking who is actually deciding what technology is created and what are the priorities of research? As David Graeber reminds us, we thought we would have flying cars by now, but in fact the height of our technological prowess has brought us 140 characters on Twitter. Who decided that our collective resources, endowments and skills would be directed in this way?

The third step is an enquiry around the concomitant effects of technology. When we created the automobile we didn’t realise that it would also create the modern city, the motorized highway system, the two-garaged house, our fossil fuel addiction, the wars in the Middle East, and in some ways the hippy revolution. In the same way, we have no idea what the effects of artificial intelligence or virtual reality will be in 5 or 10 or 20 years. Part of this line of enquiry is to hold a very big self-reflective question as a generation and a civilization: given our relationship with technology, what kind of ancestors do we want to be? And even more pertinently, what kind of ancestors are we already becoming?

Digital technology has been shown to  amplify existing inequalities of access to the power that comes from ‘connection’. Is there a simple solution to this inequality or do we need to address the system as a whole?

This is a difficult conundrum. 70% of the global population now lives in the southern hemisphere, half of which are under the age of 30. We have the youngest, most southern population in the history of humanity so in some sense the revolution can and will happen from the global South.

People are benefiting short-term from the access to knowledge that comes with the Internet or mobile telephony or tools such as Wikipedia. But in some ways we must understand that this culture best serves those who built it. The desire to assimilate the majority world into cyborgs can be seen as a corollary to the idea of financial inclusion which tries to convert free people into consumptive capitalists, ultimately trapping us all within the debt-based neoliberal economy. And at the same time, we should use the masters tools, and any means necessary, to free ourselves from capitalism and create the new infrastructures and the new stories.

Earthing, the practice of walking barefoot, is one way we’re being advised to physically reconnect with Earth. What is the importance these kind of practices?

There is a physical aspect to reconnection, but my approach starts from the idea that we must de-program ourselves from modern culture in a more holistic way. Anything one can do to shake the dominant culture’s norming and socialisation is critical and necessary. Whether that is walking barefoot in Nature, gifting something to a stranger, boundary dissolving through the use of psychedelics or other shamanic initiations – we must do everything in our power to remove ourselves from the shackles of identification with the death-machine of modernity.

The last thing I want to say is that we should not underestimate the powers that we are up against. There is a W.H Auden line from The Age of Anxiety that says:

This is the motto of the power elites, of the 1%. They would rather destroy the entire planet than let their delusions die. We must uphold, refine, amplify and cultivate a sophisticated critique of power, culture and technology, because ultimately, they are products of a psychotic, kamikaze establishment that will hoard and consume its way to our collective demise. We have to return to the primacy of Mother Earth, of our bodies, our plant teachers and allies, our communities, our Indigenous Wisdoms, our connection to the web of Life, and our forgotten abilities to enter the presence of the eternal now.