Roque Roldán: tribute to a quiet champion of Indigenous rights

The story of Colombian lawyer Roque Roldán is one of remarkable commitment to territories and areas conserved by indigenous peoples and local communities (or ‘territories of life’). In his shy and understated way, Roque shaped the geography and cultural life of Colombia, using his sharp intellect and legal mind to elevate cultural diversity to constitutional status. His work contributed to the legal development of indigenous issues in many Latin American countries, and globally.

Roque Roldán passed away at his home on 12th March 2020. We will miss him greatly.

Born into a traditional peasant family in rural Antioquia in 1939, Roque’s childhood was marked by living close to the Embera Indians of Montaña de San Matías, and occasional meetings with young, liberal lawyers. In Medellín he worked as a store delivery boy to pay for his studies in law and political science and began assisting prisoners who had no one to defend them – often indigenous prisoners, many of whom did not know the reason for the loss of their freedom. He became passionate about finding a clear legal framework to defend indigenous peoples and, in particular, to recognise their territorial and cultural rights. 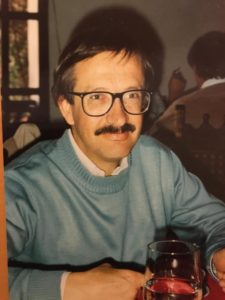 In the 1960s Roque was a lone voice calling attention to the effects of colonisation and mining on the lives of indigenous and traditional peoples and the threat of cultural erosion across Colombia. In an era of scarce technological resources, equipped with only a notebook, rudimentary maps and a compass, Roque made exhausting journeys on foot and by canoe, documenting the problems that indigenous communities were experiencing.

In 1985, Roque directed the Colombian Office of Indigenous Affairs, from which he advocated a different model of management of indigenous affairs by the State.

Colombia’s Political Constitution of 1991 provides a lasting legacy of Roque’s vision – it recognises the multi-ethnic nature of the Nation and establishes that resguardos (indigenous ancestral territories) have been collectively held for generations and so cannot be sold, seized or embargoed. The political geography of Colombia changed with this recognition (see map). 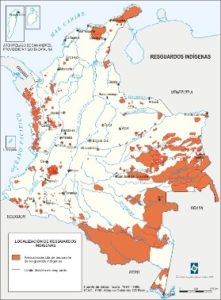 There are now 710 recognised resguardos in Colombia covering an area of nearly 36 million hectares, or 31.5% of the country’s surface area, though sadly the threat from mining and extractive industries has re-surfaced and with a vengeance.

He was  a key advisor and participant in the award-winning COAMA program, a long-term initiative led by a small group of Colombian non-government organisations – Gaia Amazonas, CECOIN, Etnollano and Puerto Rastrojo – and the Gaia Foundation.

Martín von Hildebrand, of our sister organisation, Gaia Amazonas, worked with Roque for many years:

We lost a great friend, a simple and modest man who changed the history of the ‘indigenismo’ – work dedicated to indigenous peoples – in Colombia and consequently the history of the country.  He left us a very important legacy and we will always remember him fondly.

A legacy for Latin America and the World

Beyond his work in Colombia, Roque devoted himself to advising governments across Latin America to adopt policies that recognise and support indigenous peoples and their rights. He did so in countries including Nicaragua, where he helped lay the foundations for the autonomy status of the indigenous peoples of the Atlantic coast, as well as in Guatemala, Honduras, Panama, Peru and Ecuador.

This trailblazing legal work was supported by the International Labor Organization (ILO) and contributed to the creation of ILO Convention No. 169 –  a global landmark in the recognition of Indigenous and Tribal Peoples’ rights all around the planet.

Roque was the author of key publications on indigenous rights, and Gaia was honoured to co-publish a number of his works:

Text drawn mostly from an award nomination, written by Enrique Sanchez, a Colombian sociologist who worked alongside Roque for many years, and describes him as shy, humble of heart, but a tireless worker.