Originally published by REDweb and The Ecologist, this story from Gaia’s Finnish partner organisation the Snowchange Cooperative explores how the community of Selkie is leading the restoration of rivers, lakes and carbon-rich peatlands damaged by the extractive industries. It is a story of hope and traditional knowledge in action. 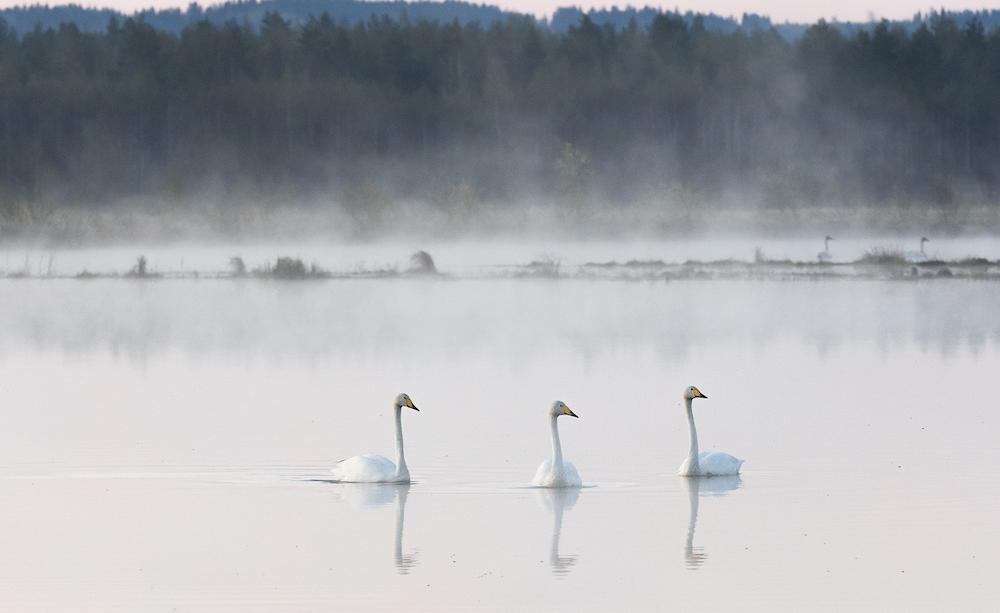 North Karelia, located in Eastern Finland, has been the traditional homeland of the Sámi, Karelian and Savo-Karelian peoples, who have enjoyed a deep and rich connection with nature through the ages.

Seasonal hunting, fishing, gathering activities and, in more recent times, small-scale agriculture, have formed the basis of life in a region rich in boreal forest, lakes, rivers and marsh-mires.

Today, some natural resources continue to play a significant role in the local economy and society of North Karelia. Timber and forestry products have become, from a state perspective, the region’s most important resources.

North Karelia has also been a central location in recent Finnish mining history for both peat and minerals, suffering major impacts as a result.

For example, one North Karelian community, Kuusjärvi, underwent a transformation after World War Two (and at some scale since 1910s), becoming ‘Outokumpu’ (meaning Strange Mound) – a state-led mining town which has a severe pollution record that impacts the nearby Lake Sysmäjärvi.

Finland emerged as a ‘land of opportunity’ for international and domestic mining in the 2010s, due to the legal reforms encouraging mining company access and investment, the downscaling of independent environmental authorities and a lack of existing social and legal rights of local communities.

It was only in the 1980s that Finland established its own Ministry of Environment. But in recent times right-wing powers in Finland, especially the Centre Party, have consistently undermined and eroded the power of NGOs and environmental authorities as part of a wider neoliberal agenda.

The Centre Party, which was in power between 2003-2011, regards environmental legislation and regulation as an economic obstacle to be removed. In recent years the Finnish Coalition Party has compounded these problems by pushing through administrative reforms under the Ministry of the Economy that require all sectors, including the state environmental authorities, to produce tangible profits, thereby undermining the possibilities for environmentally sound decision-making.

Ironically, Finland has moved to establish a reputation as a world leader in clean and responsible mining in this same period.

The establishment of the Network for Sustainable Mining and the Finnish Geological Survey’s Green Mining concept, are key achievements in a ‘double-movement’.

On the one-hand, regulation is reduced and extraction and its impacts are expanded in practice. On the other, pro-mining corporate and state PR create the impression of an industry holding itself to higher standards than ever before, justifying deregulation.

The trend of increasing ease of access to mineral resources is expected to intensify in future as geopolitical interest in the boreal and Arctic peripheries grows. These regions contain much of the planet’s untapped mineral wealth.

New sea routes to get these minerals out of the Arctic at lower cost are opening up due to climate-change-induced losses in sea ice.

In response to these new realities, Finland and North Karelia have seen the emergence of local and global actions challenging this new wave of extractivism. This resistance has yielded early victories, for example in the village of Selkie, where the community has succeeded in restoring a whole river catchment area to health after it was damaged by peat mining and ditching for industrial forestry.

The Jukajoki River catchment and Linnunsuo Marsh-mire, a former peat mining site, are located in the village of Selkie.

Selkie is home to around 300 people and is located at the intersection of the middle and southern boreal taiga forests. The Vuoksi and Lake Ladoga catchment areas divide on top of the Selkie hills, flowing on to feed into the two major catchment areas of NE Europe.

Selkie is the second oldest recorded village in North Karelia and one of the western-most of the Karelian villages where Kalevala-style epic songs and incantations have been recorded. In pre-historic times, Selkie’s first inhabitants were the Indigenous Sámi people.

Later, and up until the 1640s, the village was occupied by Karelians. Due to the Swedish-Russian Rupture Wars and subsequent transfer of territories, most Karelians left for Tver, Russia. The village population was replaced with an ethnically Savo-Karelian population who still live in the village today.

The traditional ways of life in Selkie have, and to some extent continue to, revolve around fisheries, hunting and traditional small-scale slash-and-burn agriculture, which transformed into modern, small-scale farming post-World War Two.

Today, the village also contains a mix of modern occupancies, services, small-scale forestry and farming. This is a village that has been able to preserve its soul by adapting to the times whilst maintaining traditional livelihoods and connection with the land.

Following the Second World War, Finland was forced to pay a 300-million-dollar war-debt to Russia. A period of rapid industrialisation to fund the repayments followed, including the draining of over half the country’s marshlands for timber plantations, agriculture, and peat mining – a massive contributor to greenhouse gas emissions.

From the 1980s onwards, Finnish peat production company VAPO utilised the post-glacial marsh-mire of Linnunsuo (Marsh of the Birds) in Selkie for industrial peat mining to provide domestic energy in Finland.

Peat-rich soils are filled with iron sulphates and are very acidic. Changes to the water table caused by VAPO’s mining operations at Linnunsuo created conditions for discharges of very acidic waste water into Jukajoki river.

Leaks of acidic waste water documented in 2010 and 2011 were so bad that they killed all the fish in the river. Discharges like this had happened in the past, too.

After the first fish-death event in 2010, the village council of Selkie requested the withdrawal of VAPO’s mining permits, compensation for the damages caused by the 2010 fish deaths, and mitigation of river damages.

Then, after a prolonged dry period and high temperatures in June 2011, a series of heavy rains led to another rapid discharge of highly acidic waters from the mine. After this second major pollution event, the people of Selkie came together to successfully close down the mine for good and pressure VAPO into financing the restoration of the Linnunsuo marsh-mire.

There were several factors and strategies behind this success: First, villagers had already been undertaking their own endemic monitoring of aquatic ecosystems using fish traps, oral histories, photography and other tools. They had baseline evidence of ecosystem health and knew the difference between healthy and unhealthy waters.

Second, a handful of local fishermen constantly out on the water were able to draw attention to the fish kill events, and to determine the source of pollution – the VAPO peat mine- from the characteristics of the water. Their endemic knowledge and speed of response was critical.

Third, the local fishermen were able to report their observations to the active and united Selkie Village Council and the local NGO the Snowchange Cooperative, having already developed close relationships through the endemic monitoring projects.

Following the 2011 pollution event, these allies responded immediately, called in the authorities, filed a criminal complaint against VAPO and pushed hard to successfully gain national media coverage of the mine spill.

Feeling pressured and with its public profile at risk, these tactics forced VAPO to immediately suspend production at Linnunsuo site 2.

Subsequently, villagers used the pressure they had built to demand that VAPO permanently discontinue its mining operations and finance the restoration of the former marsh-mire.

Under public scrutiny, the company agreed to pay financial compensation to the fishing association of Selkie. VAPO also agreed to finance the largest human-made wetland in Eastern Finland, over 120 hectares, on the site of the former mine.

Selkie shows how one small community can not only stop destructive mining, but also begin to restore the living ecosystems that sustain life on Earth, and the knowledge that can enable us to live well within our planet’s limits.

The villagers of Selkie have actively taken their place in the revival of Linnunsuo and other damaged areas in the Jukajoki River catchment. In 2013, a co-management council was established to manage the restoration of Linnunsuo. The council’s function is to collectively manage the use and restoration of the site, and community organizations have established a central role for themselves.

Through a restoration programme bringing together traditional knowledge and science, Linnunsuo has enjoyed a dramatic and rapid return to health. It has quickly become a highly regarded wetland habitat for rare birds and mammals, including sandpipers, northern pintails and wolverines.

193 bird species have been recorded in the area, and over 20,000 geese at a time have flocked to the wetland, resting on their migrations to and from Siberia.

Improvements in water quality and reductions in iron sulfide contamination from the site are substantial. Local people have discovered aquatic species such as brook lamprey- an indicator species for good water quality – in the wider catchment, affirming the dramatic recovery of freshwater habitats.

Linnunsuo is now recognised as a wetland of international importance under the Ramsar convention, an Important Bird Area and Finland’s second ever Community Conserved Area.

The benefits of co-management go far beyond these measurable environmental outcomes. The development of the co-management council has changed how local-traditional knowledge is recognised and valued.

This knowledge is now recognised as equally valid to science-based and institutional knowledge by all actors in the council and the local community are valued partners. Since the Linnunsuo wetland was re-wetted in 2013, Selkie and the Snowchange Cooperative (which has since purchased the Linnunsuo site from VAPO) have built on their success, initiating an effort to revive and re-wild the entire Jukajoki River catchment.

In the short term, the goal is to restore the entire Jukajoki catchment area using traditional knowledge and science as equally valued forms of knowledge production.

By 2025, the aim is to have restored Lake Jukajärvi and inflowing river bodies, allowing the return of lake trout, grayling and salmon.

In the longer term, the vision is to establish a ranger program providing economic opportunities to local communities, establish a stable governance and co-management system for the entire watershed, including a monitoring program that incorporates traditional knowledge and science.

Beyond North Karelia, the successes of the Linnunsuo and Jukajoki restorations to-date has stimulated a national program of landscape rewilding in Finland to alleviate the damage caused to Finnish marsh-mires and wetlands by extractive activities.

As of February 2019, the areas under restoration totalled more than 600 hectares in area – that is 4 Linnunsuo’s, or 600 football pitches. As in the case of Linnunsuo, in time these sites will emerge as Indigenous and local community conserved areas, managed and cared for by communities like Selkie.

Tero Mustonen is a passionate defender of the traditional worldview and cosmology of his people. He is a Finn and head of the village of Selkie in North Karelia, Finland. He works for the award-winning Snowchange Cooperative, a non-profit organisation based in Finland with members across the Arctic, including the communities of Eastern Sámi, Chukchi, Yukaghir, Sakha, Evenk, Even, Inuit, Inuvialuit, Gwitchin and many more.

Hannibal Rhoades is the Yes to Life, No to Mining Regional Coordinator for Northern Europe and Head of Communications at The Gaia Foundation.

The interactive case studies upon which this series is based have been developed by YLNM member communities and organisations with the support of YLNM’s Regional Coordinators. The network’s deepest thanks go to: Snowchange Cooperative and the village of Selkie (Finland), Froxán Commoning Community and ContraMINAccíon (Galicia), Karen Environmental and Social Action Network and Kalikasan PNE (Myanmar and Philippines), Comité Ambiental en Defensa de la Vida and COSAJUCA (Colombia), Alliance of Solwara Warriors (Papua New Guinea).