UnderMining the Water Cycle explores the role the extractive industries are playing in exacerbating the global freshwater crisis. Globally more than a billion people, one in seven on the planet, now lack access to safe drinking water. This human water crisis, which  primarily affects Earth’s poorest and most marginalised communities, is in large part driven by an ecological water crisis. 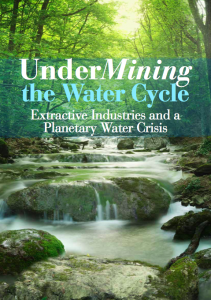 Around the world people’s ability to access enough fresh water to live and live well is threatened as sources of freshwater and the species that rely on them are devastated and depleted. A third of the planet’s 37 major aquifers are being sucked dry, many of the world’s major rivers no longer reach the sea, and pollution of lakes, rivers and streams is rife.

The extractive industries are a key contributor to the pollution, exhaustion and destruction of water systems. Sustained by demand for minerals, metals and fossil fuels from new economic hubs in the Global South and unsustainable consumerism in the Global North, extractive operations are having uniquely wide-ranging impacts on the water cycle.

Through facts, figures and a beautiful infographic, UnderMining the Water Cycle explores these impacts in detail. Revealing a story of ecological destruction, pollution over generations and climate change, the report is a call to action for citizens to stand up an defend water for future generations of all species. It calls for stronger regulation from states and for post-extractive alternatives to materialistic development and the pursuit of economic growth that feeds the commodification and destruction of nature.

The Gaia Foundation and our global allies have produced a number of reports and films about the impacts of the extractive industries. Find out more through the information and links below:

Opening Pandora’s Box– The New Wave of Landgrabbing & the Devastating Impact on Earth (2012) reveals the leading role the extractive industries are playing in global land grabbing, turning their attention to ever more pristine and fragile ecosystems and more extreme technologies. 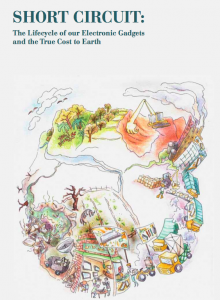 Short Circuit – The Lifecycle of our Gadgets and the True Cost to Earth (2013) takes a ‘cradle-to-grave’ look at the lives of our gadgets, from extraction to e-waste.  These themes are picked-up by our fast-paced animation, Wake-Up Call.

UnderMining Agriculture- How the extractive industries threaten our food systems (2014) exposes the hidden costs of mining on food, water, land, air and climate, through data, case studies and an attention-grabbing infographic.

Mining: When is Enough, Enough? (2016) deconstructs the mining industry myth that we need to mine more of everything. It examines the case for leaving gold, copper and fossil fuels in the ground and  explores alternatives, like post-extractive circular economies.

In Defence of Life (2016) is our feature length film that follows the struggles and successes of four communities resisting mining in South Africa, Romania, Colombia and the Philippines. Exploring these David and Goliath struggles, the film shows that when injustice is globalised, so is resistance. It is available in French and Spanish and accompanied by a series of interviews.