Defenders of the Earth by Global Witness 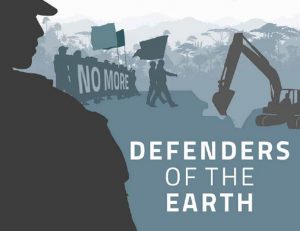 At least four people are killed every week while protecting land, water and life. Find out how, why and who’s behind the killings of Earth’s defenders.

It has never been deadlier to take a stand against companies that steal land and destroy the environment. In their 2017 report Defenders of the Earth, Global Witness expose the pattern of murder and violence perpetrated against people protecting their land and the natural world from industries like mining, logging, agribusiness and the states that collude with them.

Killings of defenders are not only growing, they’re spreading. In 2016 Global Witness documented 200 killings across 24 countries, compared to 185 across 16 in 2015. Almost 40% of those murdered were indigenous. Investigations found strong evidence that the police and military were behind at least 43 killings, with private actors such as security guards and hitmen linked to 52 deaths.

Murder is just one of a range of tactics used to silence land and environmental defenders, including death threats, arrests, sexual assault and aggressive legal attacks.

The report analyses why Earth’s defenders are facing increased threats, and explores what can be done to keep activists safe.