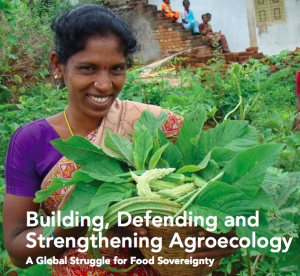 This fantastic publication and video explore the meaning and politics of agroecology from social movement perspectives. The publication was produced by the Centre for Agroecology, Water and Resilience of Coventry University and ILEIA, the Centre for Learning on Sustainable Agriculture in 2015, authored by Michel Pimbert and colleagues.

While agroecology has been practiced for millennia in diverse places around the world, today we are witnessing the mobilisation of transnational social movements to build, defend and strengthen agroecology as the pathway towards a more just, sustainable and viable food and agriculture system.

We see Agroecology as a key form of resistance to an economic system that puts profit before life. […] Our diverse forms of smallholder food production based on Agroecology generate local knowledge, promote social justice, nurture identity and culture, and strengthen the economic viability of rural areas. As smallholders, we defend our dignity when we choose to produce in an agroecological way.
Declaration of the International Forum for Agroecology, 2015

On February 27, 2015, civil society actors from around the world gathered in the Nyéléni Centre in Mali to write the Declaration of the International Forum for Agroecology (hereafter: Nyéléni Declaration). Together, peasants, farmers, indigenous peoples, pastoralists, women’s movements and urban people penned a landmark document that articulates the common vision, principles and strategies of an agroecology that is defined and controlled by the people.

The Nyéléni Declaration claims agroecology as a bottom up movement and practice that needs to be supported, rather than led, by science and policy. From this perspective, agroecology is inseparable from food sovereignty: the right of citizens to control food policy and practice.

The dominant model of agricultural development has been largely based on industrialisation, commercialisation, corporatisation and specialisation. The focus on the integration of food producers into global markets at the expense of more holistic territorial development models that support livelihoods, environment and wellbeing has led to deep crises in the food system.

Food and agriculture are now deeply implicated in the climate crisis and loss of biodiversity, the erosion of rural livelihoods, and the contamination of land and water. The dominant food system undermines food cultures, fails to alleviate hunger and malnutrition and is enabling the unprecedented consolidation of power in the hands of corporate agribusiness and transnational institutions.

Food producers, consumers and social movements around the world are not standing idle in the face of these threats. They are putting alternatives into practice, building and sharing knowledge among themselves and with others, setting up new institutional arrangements and mobilising to establish agroecology as the most important avenue for healthy and just agriculture and food systems and indeed as the only way of resolving the problem of hunger in the world.