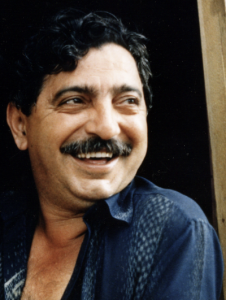 In 1988, Chico Mendes, the legendary rubber tapper leader from Brazil, received Gaia’s first small grant of $500 per month so that he could dedicate himself to stop the burning and logging of the Amazon Rainforest, and build a forest people’s movement in resistance. He wrote to us:

Chico was assassinated at the close of that year. He is referred to as the ‘Gandhi of the Amazon”, inspiring future generations to continue the work to unite as forest people’s committed to protect the rainforest against the industrial onslaught. 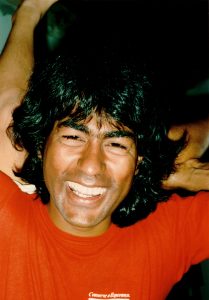 Ailton Krenak was born in the Doce River valley in the State of Minas Gerais, Brazil. A member of the Krenaki tribe, at 17-years old he learned how to read and write, became a graphic producer and journalist, and dedicated himself to the indigenous movement in Brazil.

In 1987, he captured media and public attention by painting his face black while delivering a speech in the National Congress, as a gesture of mourning for the backwards steps being taken on indigenous rights. A charismatic leader, he brought together the 180 different indigenous tribes of Brazil and worked tirelessly for Indigenous Rights to become part of the country’s official constitution.

Ailton has been an inspiration and advisor to Gaia since our early years and we worked on many initiatives together.

In the late 80’s Ailton Krenak and Chico Mendez united and in doing so helped overcome historical tensions between the indigenous peoples and the rubber tappers. Together they created a stronger Forest People’s Movement to stand up to the destructive forces threatening them. In 1988 Gaia launched the Forest People’s Support Group and the Forest People’s Fund, to enable them to organise their resistance and educate society about their diverse cultures and their role in maintaining life in the forest. Today, the leaders of these communities and still working closely with Ailton to advocate for indigenous rights and the protection of their ancestral lands across Brazil, as the onslaught continues. 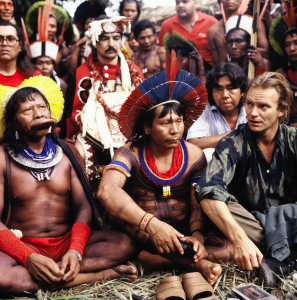 In February 1989 over 600 Kayapo indigenous people and neighbouring tribes famously protested in a mass rally at the Xingu River, Altamira, against plans to build six hydroelectric dams within their territory. The dam would flood 8,300 square miles of ancestral territory. With support from allies, Gaia funded a troop of buses to enable Ailton Krenak, Chief Raoni – a well known Kayapo Leader – and many communities to travel to Altamira.

Gaia helped to raise international media interest and support – the Pope sent a telegram, Anita Roddick and her daughter Sam joined the protest and the rock star Sting flew in to give a press conference. Within two weeks the World Bank announced that it would not confer the loan earmarked for the dams and the Brazilian National Congress planned to conduct a formal investigation into the entire plan.

The Kayapo continue to face threats from megadams and mining to this day. Chief Raoni recently visited the UK to raise awareness of their challenges. You can find out more from our allies Tribe Alive.