Small Grants: Ashaninka Communities Link Up Across Brazil and Peru

The Ashaninka are one of the most numerous indigenous peoples of the Amazon – approximately 100,000 people. This is despite centuries of violence against their people, lands and culture, from settlers, missionaries, governments and guerrilla movements, and the separation of their tribe by the definition of borders between Brazil and Peru. Currently, the vast majority of the Ashaninka inhabit 353 titled indigenous territories in the Peruvian Amazon, while approximately 1500 Ashaninka live on five indigenous lands in Brazil, in the state of Acre, on the border with Peru. 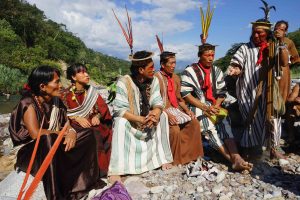 Among those in Brazil, the Ashaninka of the Amônia River is the largest, with a community of approximately 800 people. After a long fight against illegal logging on their land, the Ashaninka of the Amônia River, established their own organisation called APIWTXA. Their particular concern is for cultural revitalisation and environmental protection, not only of their territory, but the whole basin of the Upper Juruá and Brazil-Peru border region – one of the most biodiverse regions in the world.

Yorenka Tasori (Wisdom of the Creator) is an exciting step for APIWTXA, led by Ashaninka Leader Benki Piyãko, to strengthen the culture and ability of his community to protect their places of origin. Their am is to draw the attention to the risks and losses the Ashaninka experience, from illegal exploitation of gold and timber, illegal hunting, and drug trafficking; and to strengthen ties between the Ashaninka of Brazil and Peru to work jointly for the revitalisation of their culture and the protection of their territories.

Yorenka Tasori is about exploring territory, the strengthening of traditional cultural knowledge passed down from generation to generation (songs, music, myths, stories, arts, and shamanic and medicinal knowledge), and the protection of sacred natural sites. APIWTXA will make an audio-visual record of exchanges between Ashaninka communities and knowledgeable elders, and produce educational materials for Ashaninka schools in Brazil and Peru as a legacy for future generations.

A particular concern is to protect the sacred natural sites of the Ashaninka people, which, in most cases, no longer lie in Ashaninka hands. Gaia is helping to support the pilgrimage, filming and community exchanges of APIWTXA to the hills of the Cerro de la Sal and the Sacred Valley of Pakitzapango (House of the Eagle), considered the birthplace of the Ashaninka people and now threatened by a hydroelectric dam promoted by the Brazilian and Peruvian government, and to sacred places along the Ucayali, Tambo, Ene and Perene Rivers.

Visual documentation will contribute to a longer-term commitment for the recognition of these sites as cultural heritage of the Ashaninka people and as no-go areas for extractive industries or other damaging activities.

Thanks to SAHARA-London, for their small grant to this exciting initiative linking Ashaninka communities from Brazil and Peru for the protection of their sacred lands. Please join them and pledge your support to Gaia’s Small Grants.