I call upon government, civil society and cultural institutions to embrace and support the recommendations of this report in order for us to protect our Mother Earth and her diverse species and human cultures which have sustained conditions for life’s continuity for generations. It is our responsibility to the next generation to do so.”

Gaia’s focus on sacred natural sites began more than a decade ago. Based on concerns expressed by shamans from the Amazon, Gaia commissioned a report, in 2008, to assess what information was in the public domain.  Sacred Sites: An Overview revealed the lack of public and policy understanding about the vital ecological, cultural and spiritual role of sacred places and landscapes. Gaia began to work with indigenous custodians and international allies to raise the alert among regional and international bodies, including the International Union for the Conservation of Nature (IUCN) and the African Commission. To start the ball rolling, we co-produced a special edition of Resurgence Magazine, with feature articles on bio-cultural diversity and the sacredness of place, and helped to facilitate gatherings of custodians of sacred natural sites – from Asia, South America, Africa, Australia and the Pacific.

This laid the foundation for a breakthrough in May 2017. After much lobbying and advocacy by Gaia, the African Biodiversity Network, African partner organisations and other allies, the African Commission on Human and Peoples Rights passed a new resolution, heralding a new chapter in the protection of sacred natural sites and territories across Africa.

This new resolution strengthens the call for these critical places to be protected from unwanted industrial projects, like mining, and builds the power of indigenous custodians of sacred lands. It follows a similar victory last year at the world’s largest conservation gathering- the World Conservation Congress.

Right now this is vital. In their relentless search for profit, the extractive industries are infringing on more than 30% of Africa’s protected areas. In Uganda alone, mining licenses have been granted in 25 of the country’s 28 protected areas. The new resolution is a major step forward for these custodian communities, says Gaia’s Director, Liz Hosken:

“Indigenous peoples are facing increasing violation of their ancestral lands in the scramble for Africas rich natural heritage. The current dominant legal system legitimises the plundering of the planet. In this landmark resolution, the African Commission opens a space for decolonising law and affirming plurilegal systems which recognise the Earth as the primary source of law, Earth Jurisprudence, the underpinning of customary governance systems.”

We would like to acknowledge the African Biodiversity Network, our partners and the African Earth Jurisprudence network, and other allies such as Roger Chennells, Nigel Crawhall, Dr Rachel Murray, Minority Rights Group and various African Commissioners and advisers, for their hard work and sage advice in helping achieve this precedent. 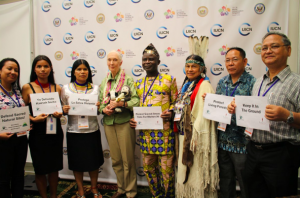 At the IUCN World Conservation Congress in 2008, custodians made a joint statement explaining that the critical role of sacred natural sites can be likened to acupuncture points in the body of the Earth, maintaining the energetic flow of life and its capacity to self-regulate. Their presence at the Congress helped secure IUCN Resolution 4.038 for the “Recognition and conservation of sacred natural sites in protected areas”. Since then Gaia has been at the heart of a strong alliance between custodians and supporting groups, including many of our African and Amazon partners, to embed the recognition of indigenous sacred natural sites and territories and the rights of custodian communities to govern their sacred lands in regional and international fora.

This work is rooted in accompanying traditional and indigenous communities and their custodians to strengthen their traditions, to deal with the threats affecting their sacred sites and territories and to develop strategies to gain legal and policy recognition for them to maintain their ways of life.

At the IUCN Congress in Hawaii in 2016 we promoted what became the most contentious motion, to stop “environmentally damaging industrial activities and infrastructure development” that impact all protected areas, including sacred natural sites and territories and areas conserved by indigenous peoples and local communities [Motion26]. After much hard work, it was eventually passed by more than 94% government and 98% civil society votes. Gaia will now be working on ways to ensure this policy decision is both respected and implemented by governments and the private sector as communities exercise their rights and responsibilities.

One such arena is with the African Commission for Human and Peoples’ Rights (ACHPR), where Gaia convened custodian communities and African partners to launch a Call for Legal Recognition of Sacred Natural Sites and Territories, and their Customary Governance Systems. Our report and recommendations were circulated widely in English and French, and it forms the basis of the new resolution passed in May 2017.