GRAIN: Grabbing the bull by the horns – it’s time to cut industrial meat and dairy to save the climate 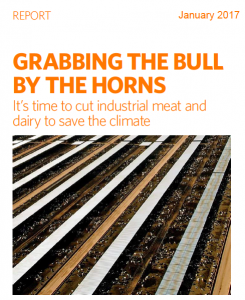 GRAIN’s report Grabbing the Bull by the Horns challenges our global addiction to industrial meat and dairy, and highlights the true cost to people and plant.

When we think of the big drivers of climate change, cars and air travel often come to mind. But transformations over the past century in the way food is produced and consumed have resulted in more greenhouse gas emissions than those from transportation. The biggest culprits? Industrial meat and dairy.

The most widely cited official estimate holds that the food system is responsible for up to 30 per cent of all greenhouse gas (GHG) emissions. Some of these emissions are due to the growth of packaged and frozen foods, the increased distance foods are shipped and the rise in food waste. But the most important source of food system-related GHG emissions is the escalation of meat and dairy consumption—made possible by the expansion of industrial livestock and chemical-intensive feed crops. The UN Food and Agriculture Organisation (FAO) says meat production alone now generates more GHG emissions than all the world’s transport combined.

There is no way the world can continue down this path without wildly overshooting the target, set by governments in Paris last year, of two degrees Celsius by 2050. Cutting meat and dairy consumption is imperative, especially in the US, Europe and other wealthy countries that have subsidised industrial meat and dairy production for decades. These countries’ policies have generated astronomical profits for corporations and eroded the health of their citizens while worsening the climate.

Cutting consumption first requires understanding which meat and dairy production systems are most at fault, and the mechanisms and policies that prop them up. Herders in poor countries and small farmers practising diversified crop and animal production are not the problem. Factory farming—promoted by the industrial meat lobby, corporate subsidies and free trade agreements—is the real climate culprit.