Fighting for our Shared Future: Protecting both Human Rights and Nature’s Rights 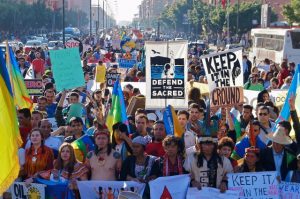 Indigenous peoples and their allies unite to fight for our communities future. Earth Law Center

When Nature’s rights to be, to evolve and to remain healthy are violated, human rights are violated in the process. To achieve the human rights fought for and cherished by all, we must first protect Nature.

Across the globe, governments and corporate entities are harassing, threatening, attacking, imprisoning, and killing defenders of Earth and human rights. Meanwhile, Earth suffers from escalating threats such as species extinctions, toxic pollution, deforestation, mining, a rapidly changing climate, and many other onslaughts.

Many of these harms rise to the level of ‘co-violations’, which occur when governments, industries, or both, violate both nature’s rights and human rights with the same action.

This report from the US-based Earth Law Center analyses 200 cases of co-violations and highlights many chilling trends. For example, 28 percent of human rights violations examined involved at least one murder. 30 percent of examined cases involved harm to indigenous peoples’ rights, despite their comprising only five percent of the population. Almost 60 percent of the cases resulted in biodiversity loss, underscoring a recent study alerting that the world is now on track to lose two-thirds of Earth’s animal life by 2020.

The report examines these trends in detail and makes recommendations for actions that can help stop this onslaught against life. They include recognising the fundamental rights of nature, such as through U.N. adoption of the Universal Declaration of the Rights of Mother Earth.