Leave the gold in the hills 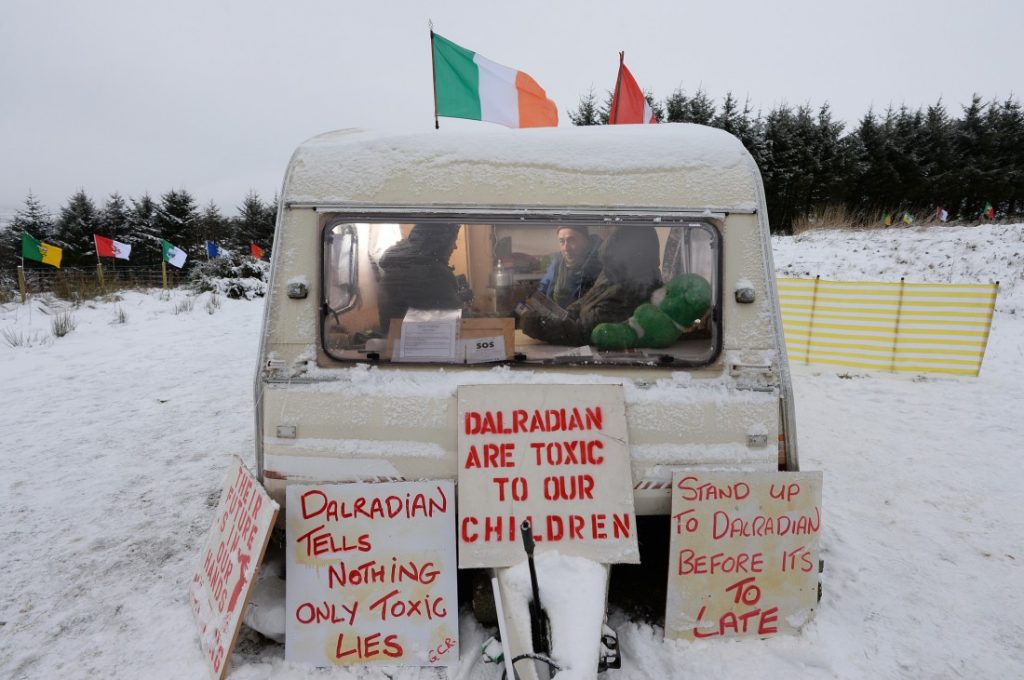 “A mask of gold hides all deformities”- Thomas Dekker

Wind whips across high hills of moor heather and spring grass, bringing with it rain shadow and short, heavy showers. Unperturbed, fifty or so people chat happily under hoods, umbrellas, a stand of trees, drinking thermos tea and eating huge volumes of cake. These emerge, endlessly, from a small caravan, parked in the layby of a single-track hill road.

The caravan, like much of the surrounding countryside, is emblazoned with handmade signs proclaiming variations of one message: ‘Dalradian Out’.

This is the Greencastle People’s Office and it marks the epicentre of a community struggle to prevent the construction of a new underground gold mine, processing plant and waste storage facility by Dalradian Resources.

At the end of March, a group of international visitors with experience of resisting gold mining in Romania, Honduras and Spain, hosted by Friends of the Earth Northern Ireland, travelled to Greencastle to learn more and share solidarity.

All that glitters… a word on gold

Few minerals have held a more enduring and destructive fascination for human societies than gold.

Mined from ancient times, modern gold mining’s ancestry lies in a 500-year-old tradition of exploitation and expropriation in pursuit of this most auspicious metal. A tradition that incentivised and was used to justify the brutal colonisation of the land and peoples of Abya Yala, Africa and many other parts of our living planet.

Today around 2,500 tonnes of gold are mined each year on land that is often, still, grabbed from communities and converted from productive farmland, forests and hunting grounds into barren and toxic wasteland.

As easy-to-reach, high-quality deposits of gold run out, the costs of gold mining, displaced onto communities and ecosystems, are increasing. Mining companies are turning their attention to mining lower and lower ore-grades, meaning bigger mine footprints and the production of greater volumes of cyanide-laced tailings. Today, producing a single gold ring generates 20 tonnes of mine waste.

The needs driving the majority of this destruction are, in large part, the ‘need’ for jewellery, which accounts for half of global consumption, and the ‘needs’ of private investors who buy and keep gold as holdings and investments.

The 76,000 tonnes of gold stockpiled in bank vaults alone would be enough to meet the global industrial demand for gold (less than 15% of total demand) for the next 186 years, according to Earthworks.

Gold’s glamour- in the old Scots sense of the word: ‘magic, enchantment, illusion’- is largely unhitched from real needs. Yet gold commands the highest mining exploration budgets across the industry year-on-year, over $4billion in 2017 alone, and it has been found in abundance under the hills of Northern Ireland.

Since 2010, Dalradian has been present and exploring for gold in six license areas over 122,000 hectares of land in County Tyrone and Londonderry, Northern Ireland. It’s exploration efforts have built on previous companies’ attempts at mining the region, which were unsuccessful due to instability caused by The Troubles in the 1980s.

Having established the existence of “the largest known gold deposit in the United Kingdom”, according to its feasibility study, Dalradian is now seeking the necessary permits to begin underground mining operations at its Curraghinalt Gold Project. The same feasibility study estimates a mine-life of 10.5 years and probable production of 1.44 million ounces of gold and 0.66 million ounces of silver.

According to Dalradian CEO Patrick Anderson, this is just the beginning. In a 2015 interview with the Financial Times, Anderson is reported as saying:

“We are not just looking at a single gold mine here… We think we are looking at a gold camp — a gold-mining district.”

Unfortunately for Anderson, not everyone living nearby shares his enthusiasm, preferring their hills un-hollowed and their valleys un-filled.

Visiting the area around the mine, we are told protests and opposition to the project have been growing in recent years. A yardstick appears to be the number of people attending community events and meetings expressing concerns about the mine.

As the scale and possible impacts on air, water and people’s health in the Sperrin Area of Outstanding Natural Beauty have become clearer, we are told, more and more people have been turning up and speaking out.

Large rocks mined during exploration and dumped, allegedly by Dalradian, at the two entrances of the layby where the Greencastle People’s Office sits, illustrate why many don’t want this mine.

One resident pointed out how, in a matter of months since it was dumped, the rock has begun to disintegrate in the rain, turning from a hard dull grey to a yellow brown you can crumble in your hands. This, they said, is because of concentrations of pyrite in the rock, which, when it comes into contact with water and air, is converted into sulphuric acid. This process can cause acid mine drainage.

The mine will use large quantities of cyanide to separate the gold from the ore it’s found in, raising concerns over the potential for contamination and serious health impacts. With major pollution events observed at cyanide-reliant gold mines elsewhere in Europe, civil society organisations have called for an end to cyanide’s use in mining operations. Their concerns recently prompted major debate and reflection at EU level.

Dalradian’s proposed cyanide processing plant and dry-stacked tailings storage facility would be built on a ridge that is straddled on both sides by two local rivers, the Owenkillew and Owenreagh. These rivers merge near the village of Gortin and then flow to the Strule water system, which provides water to the major city of Derry. They are home to otters, Atlantic salmon and rare freshwater pearl mussels.

Local people are also concerned about the impacts of dust from large quantities of crushed ore and dry tailings being stored in an exposed highland area in one of the windiest localities in the UK.

If current plans are followed, the mine’s processing plant and tailings storage would be situated 800-900 metres from a local school and 1000 metres from the village of Greencastle.

Dalradian reports that it has “invested in developing constructive relationships with its neighbours as well as other project-affected communities”.

Yet community members, who have publicly expressed their opposition to Dalradian’s operations, allege that both a minimum of engagement and a diversity of underhand tactics designed to manufacture consent for the mine and to intimidate or silence critics, have accompanied the mine’s arrival.

In response, community groups like Save Our Sperrins and Greencastle community voices have emerged to organise local responses, linking up across scales and sectors and working with environmental organisations like Friends of the Earth Northern Ireland.

Recently, local organisations have taken their resistance global. Earlier in 2018, two representatives of Save Our Sperrins travelled to Canada’s Prospectors and Developers Association Conference- an annual industry gathering. There they told investors and potential investors to steer clear of a mine they say they will never allow to be built.

Which brings us back to tea and cake at the Greencastle People’s Office.

With the support of Friends of the Earth Northern Ireland, international visitors were able to join the people of Greencastle and others from across Northern Ireland to share their experiences of resisting gold mining, and winning.

Over the course of the weekend stories of resistance were shared from communities in Romania, where Gabriel Resources’ planned Rosia Montana gold mine was stopped by mass mobilisations; from Honduras, where, despite huge repression and killings of environmental defenders, communities have declared mining free territories through local referendums; from Spain, where a coalition of community associations, united as ContraMINAccion, stopped the Corcoesto Gold Mine and are now stemming a tide of new mining targeting tin, tungsten and copper, from Froxán to Touro.

This exchange of stories highlighted common themes between struggles separated by geography but united in spirit. Chief among these is the claim made by pro-mining lobbies that those resisting mining projects are selfish, small-minded, anti-development.

These negative stereotypes provide powerful rhetorical cover for the dismissal and repression of those who choose to defend land, water and life. In Honduras, and many other nations around the world, this story, pushed by those vested in the industry, has deadly consequences. It is the narrative smoking gun.

In reality, as a recent study by activists and academics associated with the Environmental Justice Atlas shows, communities resisting the destruction of their lands and waters are redefining and promoting true sustainability. They are bringing forward and rallying around ways of seeing and being that are sufficient, holistic and non-extractive.

In this rain- and wind-swept corner of the Sperrin Mountains, the Irish language has found a refuge, as have otters and salmon, pearl mussels and peat; the ancient Green Road, steeped in myth, runs between stone circles; the hills provide livelihoods to local farmers; the local sports club and community centre keep people healthy and offer space to celebrate local culture; the An Creggan eco-tourism centre gives locals and visitors a-like the chance to enjoy and connect with this ancestral landscape, providing employment and education for the long haul.

For the people gathered at the Greencastle People’s Office, it is clear that no golden mask can hide the realities of gold mining. They are deeply rooted, globally connected and know what they are for.