On this Madaraka (Independence) Day – let us embrace the urgency, and commit to restoring our ecosystems, defending them against destructive projects and policies and support and learn from those who are living according to the laws of life.

On Kenya’s Independence Day, Earth Jurisprudence Practitioner Simon Mitambo discusses the state of Nature, decolonisation and efforts to usher in the Ecozoic Era described by Thomas Berry, in his home country.

Kenya is soon going to celebrate Madaraka Day on 1st of June. On the same day, the world will also be celebrating a man known as Thomas Berry. Four days later on 5th June, the world will be celebrating the World Environment Day with a theme on air pollution. The question is, why are these three moments in history so important to Kenyans and the world at large? First, it is important to appreciate that Madaraka Day is one of the national holidays set out by Article 8 of the Kenyan Constitution 2010. The aim is to commemorate the attainment of our self-governance in 1963. This was after decades of British colonial rule. Madaraka is a Swahili word for freedom or independence. Self-governance meant that we now had the power to exercise control over our own affairs. 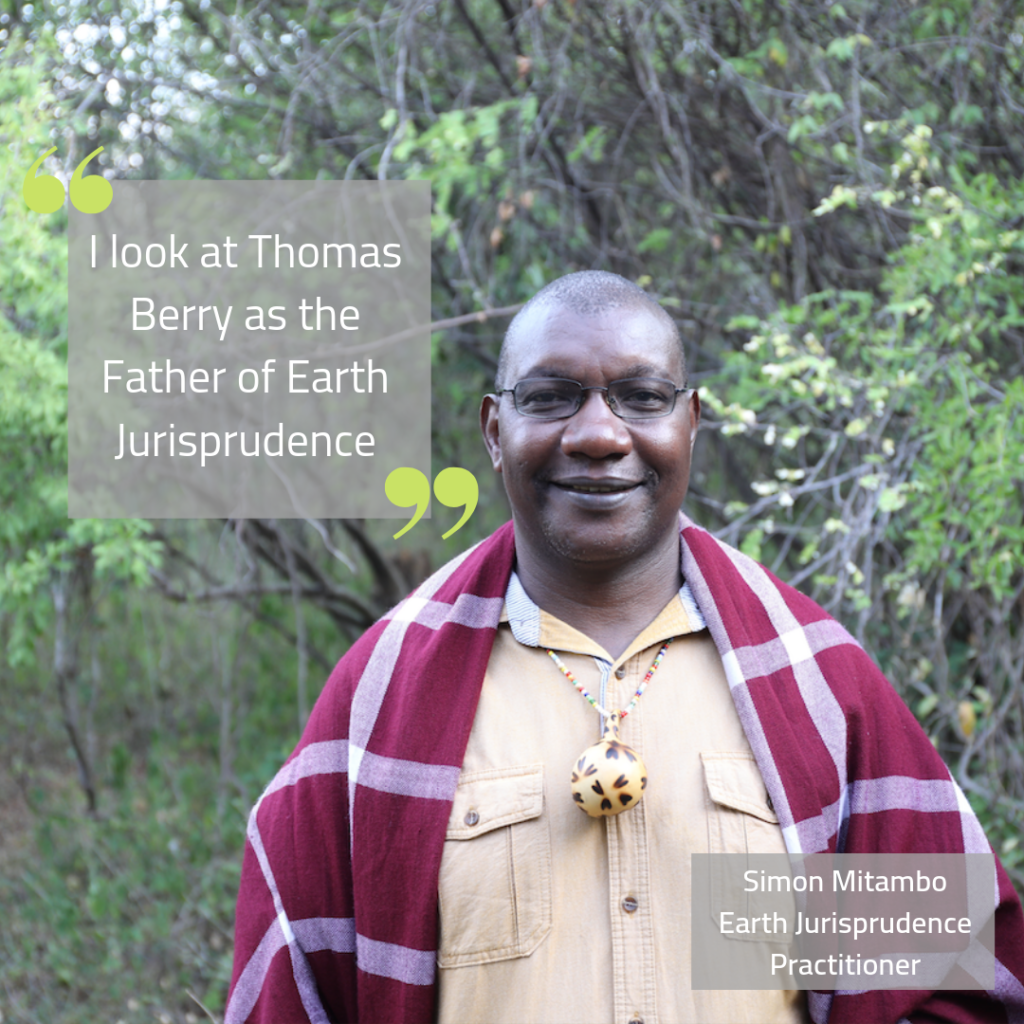 My concern is how we are going to celebrate this control of our own affairs during the Madaraka Day when drought and famine is glaring at us owing to this year’s failed rains! The reflections to this question will lead us to think of why the World Environment Day (WED). The WED is the United Nations day for encouraging worldwide awareness and action for the protection of our environment. The state of our environment in Kenya has been described by expert as a silent crisis approaching tipping point.

The beauty is that we have personalities who lived before us and worked to inspire drastic societal changes toavert these situations. These people include Thomas Berry. Berry is an American cultural historian who worked for decades to develop and promote his vision of an Ecozoic Era. Ecozoic Era refers to future when humans can live in a mutually enhancing relationship with Mother Nature and all other species. His radical ideas have influenced people all over the world; ranging from corporate globalization critic David Korten to our own Nobel laureate late Prof. Wangari Maathai who knew him well. Wangari will be remembered for warning Kenyans that Mother Nature can be very generous but also very unforgiving!

A recent UN Intergovernmental Panel on Climate Change (IPCC) special report has warned that there needs to be a rapid and radical action required to stay within the 1.5°C. Nature is declining globally at rates unprecedented in human history and continues to accelerate. Around 1 million animal and plant species are now threatened with extinction, unraveling the web of life which supports humans too, whether we are conscious of this or not. “The health of ecosystems on which we, and all other species, depend is deteriorating more rapidly than ever before,” says IPBES Chair Sir Bob Watson. “We are eroding the very foundations of our economies, livelihoods, food security, health and quality of life worldwide.” “It is not too late to make a difference, but only if we start now at every level, from the local to global. Through “transformative change‟, nature can still be conserved and restored.”

And for Kenya, it is not the first time we have been warned about the worrying state of our biodiversity destruction. “Kenya has so much to lose from loss of biodiversity and so much to gain from protecting and using it sustainably,” said Ahmed Djoghlaf, the Executive Secretary of the Convention on Biological Diversity (CBD). He spoke about this during the launch of the 4th edition of The Global Biodiversity Outlook Report. The report showed that the goals Kenya and other countries had set in 2002 for a “significant reduction” in the loss of biodiversity by 2010, had not been met.

Embracing drastic changes into the future

With 1 million species threatened with extinction, we have been warned that the current global efforts are insufficient to stop what is now called „the sixth mass extinction‟ mainly caused by human species. We need radical changes to stop the loss of biodiversity and restore ecological resilience -ever more critical to reduce the impact of climate change we are increasingly suffering from- drought and famine. We need to go back to the drawing board. We need to learn from the wisdom of our great ecological thinkers like Thomas Berry and Wangari Mathai. Thomas Berry in particular advanced a great philosophy and practice – recognizing the Earth as the source of the law that we need to comply with to sustain the well-being of all the species, humans included. Thomas Berry saw how indigenous people exemplify the way we can live in accordance with the laws of Mother Nature for our own well-being and that of the future generations –having maintained the resilience of their ancestral territories for generations. Berry wrote in his seminal book; The Great Work (1999), that humans must transform the dominant modern institutions, conceive new politics, economics, religious teachings and ways of educating. “Our own special role, which we will hand on to our children, is that of managing the arduous transition from the terminal Cenozoic to the emerging Ecozoic Era, the period when humans will be present to the planet as participating members of the comprehensive Earth community.”

The African Charter calls for us to decolonize the way we govern ourselves and affirms the continents plurilegal systems. The African Commission encourages governments to protect Africa‟s rich cultural and natural heritage, by recognizing Sacred Natural Sites and Territories and their customary governance systems. And we can borrow from countries like Uganda which has recently enacted an Environmental Act that recognizes the Rights of Nature.

On this Madaraka Day – let us embrace the urgency, and commit to restoring our ecosystems, defending them against destructive projects and policies and support and learn from those who are living according to the laws of life – so that our children have a viable future – together with all the other species which sustain the web of life. Let this be our legacy, and that of our country, Kenya!

Find out more about Simon, Earth jurisprudence and our work to revive culture and nature from the Amazon to Africa.