Global voices in Quito, calling for the Rights of Nature

Within sight of the snow-capped Cotopaxi volcano, in Ecuador’s capital city of Quito, Gaia joined activists, academics, indigenous leaders and students, for an historic International Rights of Nature Symposium, 27th-28th September. We were joined by Method Gundidza, from our South African partner organisation, EarthLore. 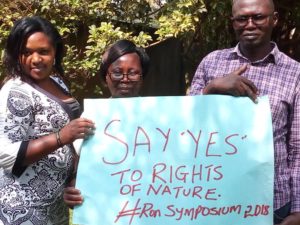 The symposium, hosted by the Global Alliance for the Rights of Nature (GARN), of which Gaia serves on the Executive Committee and Advisory Board, celebrated the 10th anniversary of the adoption of Rights of Nature in Ecuador’s Constitution. The two-day event highlighted a range of Rights of Nature initiatives, legal cases and judgements from different countries, followed by a roundtable session on 29th September. 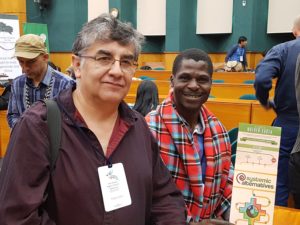 Day 1 opened with a powerful indigenous ceremony and blessing. An international panel, including Cormac Cullinan (South Africa), Pablo Solón (Bolivia) and Esperanza Martínez (Ecuador), provided the history and context for today’s growing Rights of Nature movement, with its global reach emphasised by María Mercedes from UN Harmony with Nature. 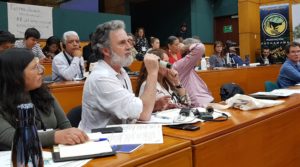 Global environmentalists and defenders of the rights of Nature, such as Tom Goldtooth (USA), Maude Barlow (Canada), Vandana Shiva (India), Michelle Maloney (Australia, YestoLifeNotoMining Regional Coordinator) and indigenous leaders from Colombia, Bolivia and Ecuador, gave testimony of the growing legal cases and initiatives around the world. 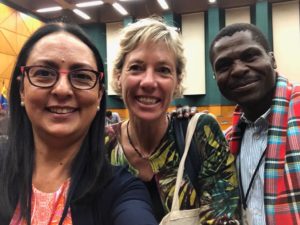 Method Gundidza from Zimbabwe, one of the graduates from our training of African Earth Jurisprudence practitioners, and Nnimmo Bassey from Nigeria, were guest speakers on the panel “Rights of Nature Movement in the World” – view the live-streamed event here.

“The most urgent work of our time is to restore a healthy relationship with our Mother Earth – the planet we share with countless other living beings; those we know and those we don’t; those we have names for and those we don’t; some visible to our naked eyes and sophisticated equipment and yet some still not. Such is the magnificence, abundance and magnanimity of our shared planet Mother Earth. Yet, as our ancestor Thomas Berry said, “an industrial civilization has come into being with the power to plunder the Earth in its deepest foundations, with awesome impact on its geological structure, its chemical constitution and its living forms throughout the wide expanses of the land and the far reaches of the sea”. – Method Gundidza 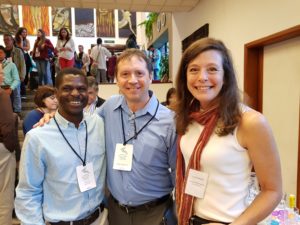 Method shared his own experience of deep immersion into indigenous African rituals, knowledge and Nature-based experiential through Gaia’s Earth Jurisprudence training; and the commitments by this growing network of African Earth Jurisprudence practitioners to work passionately on the ground with communities while influencing policy at both country and continental levels.

Day 2 of the Symposium zoomed into specific cases from Ecuador, Colombia, and other (mostly South American) countries. Local members of the audience emphasised that despite the 2008 Constitutional adoption of Rights of Nature there is a lack of fulfilment, and the need for a paradigm shift and a change to the current economic thinking of illimited growth, was highlighted by speakers such as Enrique Viale (Argentina) who berated the prevalence of glysophate in farming, and how “mega-mining is destroying the ocean beds”.

Another message of importance for the Symposium and live-stream audience, expressed by Elizabeth Bravo (Ecuador) and others, is that the Rights of Nature is more than simply the protection of ecosystems – that Nature is everything. The debate also touched on the need for a new relationship between humanity and bacteria: Do bacteria have rights? 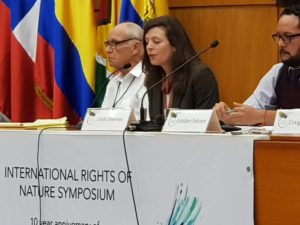 essions looked at government and academic perspectives, followed by a comparative legal analysis, moderated by Linda Sheehan, of Rights of Nature in Ecuador and other countries. A common thread, for many of the speakers, was the work of Thomas Berry’s, and how the State, Church, market economy and education keep us trapped in an anthropocentric and individualism mindset. 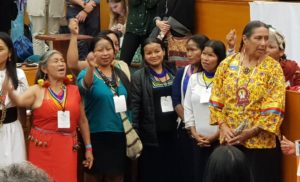 Indigenous women, led by Casey Camp-Horinek, Ati Quigua and Patricia Gualinga, led the closing ceremony (left). A declaration from participants will be circulating shortly, from these global voices in Quito calling for the Rights of Nature.

Click here to view sessions that were live-streamed during the two-day Symposium.

Day 3 was devoted to a smaller, roundtable session, aimed at building solidarity and strategies to strengthen and grow the Rights of Nature movement globally.

Indigenous leaders from the Amazon and First Nations highlighted the growing violations of Nature’s rights and human rights. Fiona Wilton, Gaia’s coordinator for Sacred Lands and Wilderness, drew from Gaia’s work in upholding indigenous wisdom and Earth-centred perspective for over 30 years, and encouraged particpants to reflect on ‘Earth’s Desire’, quoting Thomas Berry’s poem:

To be seen
in her loveliness

to be tasted
in her delicious fruits

to be listened to
in her teaching

to be endured
in the severity
of her discipline

to be experienced
as the maternal source
whence we come.

Join the movement and find out more from the Global Alliance for the Rights of Nature.