Flourishing Diversity Series: a Celebration of Indigenous Wisdom in the Heart of London

Originally published by the ICCA Consortium.

From 7-11th September, representatives from seventeen Indigenous wisdom traditions converged in London for the Flourishing Diversity Series. Travelling from diverse territories that span the Earth – from the Americas to Africa, from Europe to the Pacific – the Indigenous delegates brought with them a shared and inspiring vision of how humans might participate once more in the sacred cycles of life.

The Series was the first of its kind, bringing together Indigenous representatives with activists, students, NGOs, funders and influential ‘listeners’ from a number of fields. It was created by Jerome Lewis, from the Centre for the Anthropology of Sustainability (CAOS) at University College London (UCL), in collaboration with Jessica Sweidan (Synchronicity Earth), Paola Bay and a wider team of contributors and partners, including support from Extinction Rebellion Youth, XR Internationalist Solidarity Network and London National Park City Initiative.

Opening on 7th September, the Series began with a day-long, mobile meditation on ecological justice along the River Thames. Indigenous participants and members of the public walked side-by-side from Kingston to Greenwich to demonstrate solidarity with the Earth System. The Flourishing Diversity Summit followed, a three-day collaborative talk series held from 9th to 11th September at UCL. In the evenings, prominent figures from the worlds of business, film and fashion attended intimate ‘Listening Sessions’ with Indigenous representatives, directing deep attention to their perspectives and the wisdom of their traditions. Hosts included Liz Hosken, director of The Gaia Foundation, and Satish Kumar, Editor Emeritus of Resurgence & Ecologist. Among the listeners were British actor Benedict Cumberbatch and ethical fashion activist Livia Firth. 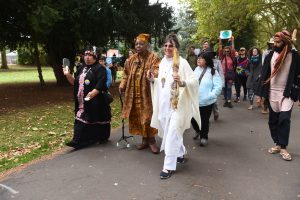 During the three-day talk series, speakers from all seventeen traditions took to the stage to share heartfelt insights into their worldview and the immense challenges facing their communities. The Summit offered an abundant schedule of talks, panel discussions and workshops in which Indigenous wisdom was shared in the context of impending climate breakdown and rapid biodiversity loss.

The first day of the Summit focused on Sacred Lands, with a particular emphasis on Brazil given the record-breaking number of fires raging across the Amazon in recent months. Representatives from the Ashaninka, Guarani and Poyanawa Peoples outlined the threats and pressures on Indigenous territories in Brazil and beyond, as well as their efforts to restore and reforest their lands and revive their cultures through collaboration between their communities. In the afternoon, talks ranged from the rights of rivers in Aotearoa from a Maori perspective, to the land-care traditions of the Khoisan (Namibia) and the Ogiek (Kenya). Sámi representative Elin Telius shared her people’s yoiking tradition – a traditional form of song that encourages connection with the land. 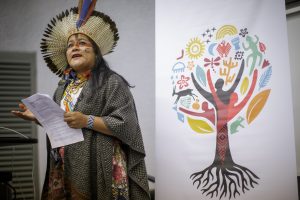 A number of themes recurred throughout the day. Indigenous representatives affirmed that humans are not separate from the natural world and have rich traditions of living in harmony with nature. As well as reforesting land, attendees were called to reforest their hearts and their minds. Speakers outlined the importance of the role of women in their communities as guardians of language and seeds and shared an alternative vision of the land as sacred Mother rather than inanimate property. They called for collaboration for the enforcement of indigenous rights and the protection of indigenous territory: as Tiago Karaí of the Guarani People affirmed, “The struggle belongs to all of us, not just indigenous communities; we are one people of this Earth.”

Day Two of the Summit centered around Mother Earth and Indigenous ‘Grandmothers’ present at the Series explored the sacred feminine and the importance of listening to the intelligence of the Earth. The emphasis of the talks was on care, nurturing and regeneration and the sessions, held by Grandmothers of the White Corn, the Black Corn, the Red Corn and the Rainbow Corn, commenced and closed with a water ceremony. 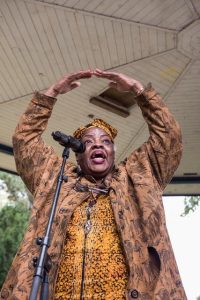 Participants were reminded of intergenerational responsibility and how actions now will impact on the lives of the future generations of all species. Indigenous speakers shared their understanding of the Earth as an interconnected whole – “nothing is divided, everything is connected” – and observed how disconnected and rootless many of us have become. In particular, speakers commented on how we have lost our connection with land, food and water.

The final day was dedicated to building alliances and looking forward to future collaborations. It began with an inspiring case study of collaboration between the Guarani, the Ashaninka, CAOS and the Indigenous Advocacy Centre (CTI) in Brazil. The parties recounted their experience of working together on a Newton Prize winning project to support the Guarani to restore the Atlantic Forest in their territories. Kaisu of the Snowchange Cooperative (Finland), a member of the ICCA Consortium, shared her community’s experience of working to restore industrial peat production sites back to highly biodiverse wetlands. Workshops in the afternoon created space for group discussion about key themes of the Series: the rights of Mother Earth and land rights; activist alliances; Indigenous education; and spiritual economics. Tangible actions and solidarity will now emerge from these spaces to take Flourishing Diversity into the future.

“What can we do”, was inevitably a recurring question put to Indigenous delegates throughout the talk series. In response, Kofi Klu of the Extinction Rebellion International Solidarity Network encouraged participants of European heritage to explore their own rich history of Indigenous cultures and to take back the Commons. He invited all of those present to connect our distinct struggles for emancipation and to rally around Mother Earth: “The most beautiful chapters of world history are yet to be written.”

You can also check Synchronicity Earth’s article on the event here.